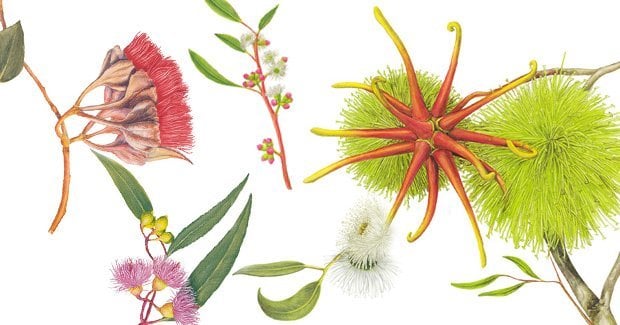 EUCALYPTS, OR GUM TREES, are the Australian trees – as much a part of the landscape as far horizons and sweeping plains. Yet most eucalypts aren’t the giant, gnarled trees that come to mind. There are more than 900 species, and their bark, leaves, flowers and fruit (gumnuts) come in endless combinations of size, form, texture and colour. Although they’re endemic to Australia and a few islands immediately to the north, many eucalypt species are cultivated in tropical and temperate regions elsewhere for a variety of uses.

Unlike many flowers, the gum blossom doesn’t consist of petals. The colourful bloom is provided by the stamens, which attract pollinators such as insects or nectar-feeding birds. The petals are fused into the operculum, or cap (except in Angophora). While many gum blossoms are white, they come in a kaleidoscope of other colours, including sulphur, orange, vermilion, red, pink, lime and purple. This bushy mallee was only named in 2008 and is known to occur in four populations near WA’s south coast. It has extraordinarily long and sinuous opercula (caps) leading to yellow-green flowers, which are tightly clustered into large balls.
Flowers: warmer months (Dec–April) This is one of nearly 100 species of Corymbia, a genus mainly restricted to Australia’s tropical north. Named in 1995, Dunlop’s bloodwood is distinctively untidy and scraggy; has rough and hairy branchlets, leaves and flower buds; and has red flowers.
Flowers: mainly end of the Dry and into early Wet Angophora is the smallest of the three eucalyptus genera, with its 12 species restricted to the eastern ranges and coast of mainland Australia. The dwarf apple is becoming popular as an ornamental shrub because of its dense bushy crown, covered in summer with masses of showy white blossoms.
Flowers: summer This species occurs in sandy or rocky soils in the very arid interior of WA and SA. It is distinctive because its large and ribbed or “winged” flower buds and fruits occur in pendulous groups of three. This is one of two subspecies, also known as wing-fruited mallee (subsp. kingsmillii). The other (subsp. alatissima) has pale yellow flowers and ribbed fruits.
Flowers: spasmodically, depending on rainfall A deservedly well-known species naturally restricted to sandy, coastal, often swampy sites in the far south-western corner of Australia, the red-flowering gum is widely cultivated across southern Australia for its fiery show of blooms, which can completely hide the foliage of the tree in summer. Its large woody fruits are almost as striking.
Flowers: Jan–April One of about 40 ironbark species, so named for their hard, deeply furrowed bark, this woodland tree, also known as mugga, is an important honey and pollen plant for NSW beekeepers. The honey is gathered by bees from hives placed by apiarists in red-ironbark woodlands. It is also an excellent tree for wood fuel.
Flowers: mainly April–Sept

Rose of the west (Eucalyptus macrocarpa) “Macrocarpa” means large fruit – a fitting name, as the individual flowers of this species are among the largest of all the eucalypts. Rose of the west, also known as mottlecah, hails from the wheat belt and sandplains of south-western WA. It is a shrubby mallee no more than 2 m tall, with broad silvery-grey juvenile leaves forming the mature crown.
Flowers: mainly spring, but spasmodically throughout the year Tasmania’s floral emblem is naturally restricted to Tasmania and southern Victoria, but is widely planted worldwide for timber and paper pulp. This is a very fast growing eucalypt and Australia’s second-tallest tree species (pipped by the mountain ash, or swamp gum, also a eucalypt).
Flowers: mainly spring Among the more common of the 400-plus mallee species, white mallee is naturally widespread in southern Australia, although populations have been fragmented by clearing for farming. As with all mallees, it has many stems or trunks growing from a woody base called a ligno-tuber, which enables the plant to regenerate after fire.
Flowers: Oct–April