The longest boxing match ever

Boxing probably arrived in Australia in 1788 with the convicts of the First Fleet, but the first recorded bout in the colony of New South Wales took place in 1814.
By Alex McClintock • August 8, 2019 • Reading Time: 4 Minutes • Print this page 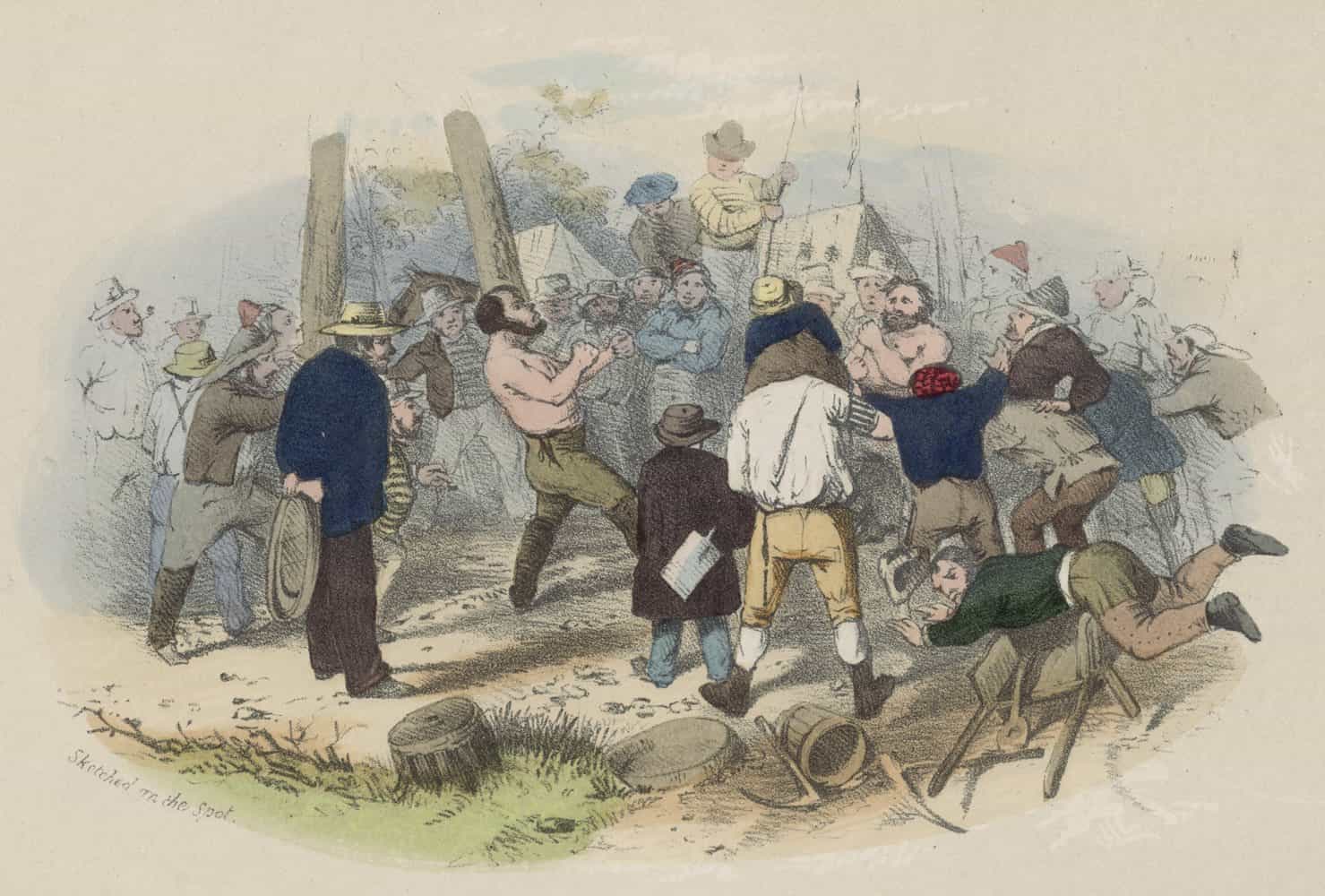 National Library of Australia Image credit: This was drawn by regular boxing spectator, S.T. Gill in 1852.

THE LONGEST BOXING match ever recorded took place in 1855 near Ballarat.

In classic boxing style, it was a grudge match between an Irishman, James Kelly, and an Englishman, Jonathan Smith. It lasted for exactly six hours and fifteen minutes.

Boxing probably arrived in Australia in 1788 with the convicts of the First Fleet, but the first recorded bout in the colony of New South Wales took place in 1814. That fight, between convicts John Parton and Charles Sefton, lasted more than two hours—not bad.

By the time Smith and Kelly took part in their marathon match-up four decades later, organised fist fighting was an acknowledged, if not entirely respectable, part of colonial life. And, like much else at the time, it was experiencing an unprecedented boom as people, including boxers, from around the world flocked to the Victorian goldfields. (In a bit of semi-related trivia, the other big gold town, Bendigo, was named after a bare-knuckle champion from Nottinghamshire, William Abednego ‘Bendigo’ Thompson.)

Smith and Kelly were two such pugilistic immigrants.

Born in Ireland, Kelly had already fought good competition in Britain and the US before deciding to try his luck in Australia. Smith, by all reports a cheerful sort originally hailing from Norfolk, had won a number of fights in his country of birth, then enlisted in the British army and served in India as well as Van Diemen’s Land, before emigrating to the colonies when the gold rush began.

Smith witnessed Kelly’s destruction of a local fighter called Hammy on the goldfields, but didn’t rate the Irishman. He obtained financial backing of £300 to issue his own challenge, Kelly and his backers accepted, and both men went into a brief period of training. A flat area near the Fiery Creek diggings was selected as the site of the ‘mill’ and a date was set: December 3, 1855.

Heavy overnight rain did not deter thousands of spectators from gathering and jamming the roads to the appointed place with carts and buggies on the morning of the fight. In the sticky summer air, miners, prospectors, food vendors and even a few women vied for a space close to the action. Local children sought a better view of the ring in the branches of nearby gum trees.

With the police nowhere to be seen, Smith and his seconds made their way through the throng to the ring at the civilized hour of 9 a.m., followed soon after by Kelly and his team. The Irishman won the toss of the coin and elected to fight with his back to the sun.

Members of the crowd remarked that both men appeared to be in excellent condition, though Smith, older than Kelly by eleven years, was the taller and heavier. Bare chested and clad in breeches, the two boxers would not have looked too different from the moustachioed Victorian strongmen you see in cartoons. The two men approached the scratch and began feinting. The spectators had no idea what they were in for.

Things started briskly enough: Smith landed a glancing left on the neck, and Kelly replied with a left to the mouth. ‘No great mischief,’ noted a reporter from the widely read colonial sports newspaper Bell’s Life in Sydney and Sporting Reviewer. Kelly, unimpressed, started talking back: ‘I only want to see your claret, then I’ll make you fight,’ he challenged.

Alas, it was not to be. Smith was content to use his reach advantage to keep Kelly at arm’s length, and the pair darted endlessly forward and back. The crowd grew restless and began to press forward as the sun rose in the sky, attempting to encourage some action.

Finally, after more than two hours, Smith connected with a stinging one-two, Kelly responded with a flurry, and both men fell to the floor. ‘This little bit of fighting was quite a relief to the spectators,’ noted the Bell’s man with droll understatement.

Understandably, the close of the round was greeted with loud cheers.

From here on out, perhaps it is best to offer only Bell’s summary of the most noteworthy rounds

Eight: ‘Kelly let go the right but received on his nose from Jonathan, the claret flowing very freely from Kelly’s snuffler.’

Fourteen: ‘Kelly excited, and perhaps somewhat annoyed at the obstinacy of his nose, which WOULD bleed.’

Fifteen: ‘Both men considerably contused, and came up puffing…when the reader is informed that nearly an hour was occupied in sparring, feinting, stepping back etc., he will perceive how inadequate is our ability to express the sustained interest of the spectators.’

The crowd, whose morning’s entertainment had quite unexpectedly turned into an all-day outing, started getting stuck into beer and sandwiches. Others cut their losses and headed back into town to spend what remained of the day with family and friends.

The bottles of stout being peddled may have contributed to the general hissing and yelling of abuse at the fighters, who at this stage were busy looking at each other spitefully and posing with their arms crossed.

‘Try a little one for me,’ yelled one wag.

‘He had better try two,’ someone shouted back.

Finally, in round seventeen, Kelly stopped in the middle of the ring and spat out, ‘Are you going to fight? It will never come off if you don’t.’ Smith obliged him, throwing a left that fell short of the mark. Kelly countered with a blow to the neck, and that was enough for Smith. He gave up and the pair shook hands.

Kelly’s seconds jumped into the ring and secured the colours from the post. Bell’s, rather kindly, praised Smith’s coolness, and described Kelly as a ‘very fine young man’ who would fare well against the best fighters of his weight back home in Britain. The crowd, struck dumb by such an unexpected and anti-climactic conclusion after enduring so much, simply drifted away.

This is an extract from Alex McClintock’s debut book, On The Chin: A Boxing Education, Text Publishing.