How the Kimberley nearly became the Jewish homeland 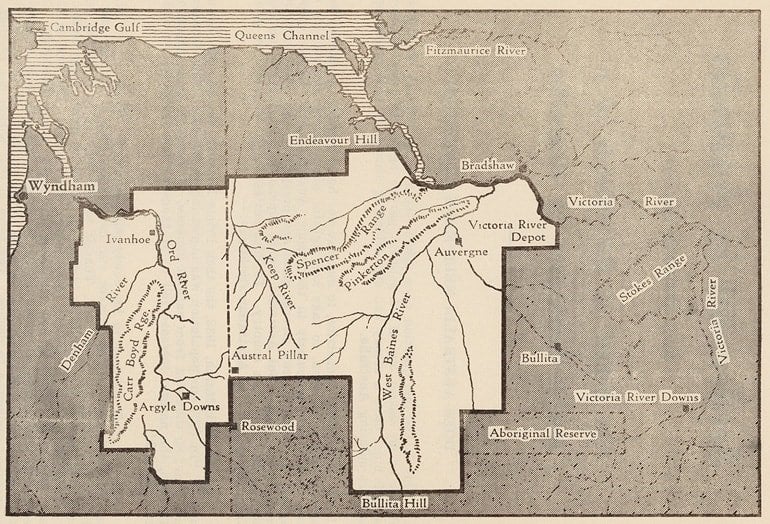 Millions of hectares in the Kimberley were considered as a possible Jewish homeland. Image credit: Kununurra Historical Society

THERE ARE THE vast uninhabited fertile stretches of the Northern Territory – Australia’s most vulnerable point of attack by a hostile nation – crying out for population. The Jew would make a sturdy and alert outpost.”

This was the wild thesis of an article in The Sydney Morning Herald (SMH) on 16 February 1907. Extolling the strengths of Russian Jews, the author wrote: “persevering and plucky, he is not discouraged by the rebuffs of nature and the many obstacles which the pioneer settler is bound to encounter”. Readers were reassured these people would be “thoroughly Australian in sentiment and deed – true Australian patriots”.

Patriotic fervour abounded that year: the Bondi Surf Bathers’ Life Saving Club formed, Carlton & United Breweries began producing the nation’s finest and the White Australia policy was in full swing. There were widespread fears of a so-called Asian Invasion infiltrating the nation’s mostly undefended north. As the SMH author phrased it: “We have to choose now between the white and the coloured man – and for the sake of posterity let us choose the white.”

Meanwhile, Europe’s increasingly persecuted Jewry was searching for its own safe spot on the planet. Uganda, Madagascar, Canada – 20 countries, in all, were considered possible sites for a new homeland. Alphabetically at the top of the list was Australia, a large and sparsely inhabited continent.

Despite the SMH suggestion, the idea stalled until the 1930s, when the Nazi Party came to power in Germany, and Jewish persecution intensified. The dream of an antipodean homeland was taken up by famed Yiddish poet Melech Ravitch (a pseudonym of Zekharye-Khone Bergner), who migrated to Australia in 1933.

With Australian government permission, a letter from Albert Einstein, an Aboriginal companion and an Italian driver, he crossed the continent to investigate. His appraisal was glowing. A million Jews could settle in the nation’s north, he reported.

Encouraged by Ravitch’s account, the newly formed Freeland League for Jewish Territorial Colonisation, tasked with finding a new Jewish homeland, set great hopes on Australia. It was serendipitous that struggling pastoralist Michael Patrick ‘MP’ Durack was eager to offload an expanse of the Kimberley, in Western Australia.

In May 1939, the Freeland League sent their leader, Isaac Nachman Steinberg, to survey the property. The impressive plan was that 7 million acres were to be purchased and an initial contingent of 500 workers would build basic infrastructure to support some 75,000 Jewish refugees, who would follow Commonwealth laws but have full cultural autonomy and develop the region’s pastoral and agricultural industries. Now with a site and plan, Steinberg just had to convince Australians of the merits of a Jewish pseudo-state. It was no short order but Steinberg was a talented emissary. He spoke seven languages, had a doctorate in law and was a former member of Lenin’s cabinet. A religious Jew and left-wing revolutionary, he was the kind of ‘everyman’ Australians could relate to.

He gained wide support from the likes of the WA premier, the chairman of the ABC and the Lord Mayor of Sydney, and others. Australians’ fear of Asians, it seemed, outweighed their wariness of Jews, and support for the proposal was further buttressed by reports of Nazi brutality. Yet there were concerns the new settlers would move from the Kimberley, attracted by the big cities. They’d take Aussie jobs and make people uncomfortable with their differences. A 1940 Bulletin magazine article calmly suggested they’d “swarm” into our cities, “even if they have to burrow under wire netting”.

In a letter dated 28 October 1943, prime minister John Curtin delivered the verdict. “The Government is unable to see its way to depart from long-established policy in regard to alien settlement in Australia,” Curtin explained, “and therefore cannot entertain the proposal for a group settlement of the exclusive type contemplated by the Freeland League.”

After four years of championing the cause, Isaac Steinberg left the country in 1943, taking with him the dreams of an Australian Jewish homeland.