Hunter-gatherer men not the selfless providers we thought 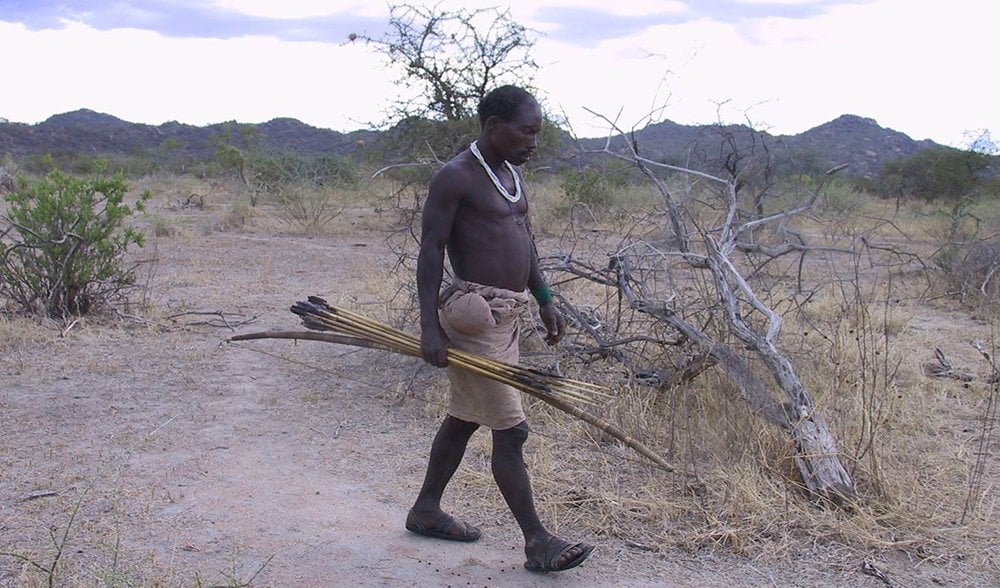 Hadza man going to forage. "They almost always carry their bow and arrows, and a small knife, and sometimes also carry an axe to access honey," explains researcher Colette. Image credit: courtesy Colette Berbesque
Reading Time: 4 Minutes • Print this page
Fearless men hunt big animals and women pick berries, and that tells us a lot about our societies today, right? Maybe not, according to a new study of modern hunter-gatherer men who have a surprising sweet tooth and a reluctance to share.

RESEARCHERS HAVE LONG considered hunter-gatherer men as hard-working, selfless mates, hardly eating anything during their long hunting trips and saving most of the food they collected for their families and friends back home.

This arrangement has been considered a key aspect in the evolution of our society, says Colette Berbesque, an anthropologist from the University of Roehampton in London. “Some scientists believe that men’s hunting and sharing meat with their family and other members of the community is one of the most critical elements in human evolution, and has led to traits such as our large brains, our long lifespan, and our ability to be highly cooperative,” she says.

However a new study published in the journal Evolution & Human Behaviour – led by Colette, working with researchers from the US, UK and Tanzania – begs to differ.

After following the daily activities of 75 hunter-gatherer men of the Hadza tribe in northern Tanzania for almost 1000 hours, the researchers found these men were not quite the family providers everyone thought – they ate most of the food they collected, and it turns out they have a sweet tooth for honey.

The Hadza are one of the few hunter-gatherer societies still following a traditional lifestyle that can be traced back to our early beginnings. It is thought the first humans were hunter gatherers, and even our non-human ancestors such as Homo erectus are thought to have been hunter gatherers.

The hunt for answers – and honey

Today, the Hadza tribe is made up of about 1000 people. Men in this society are in charge of finding meat, the main source of protein for the whole community, while women gather roots, fruits and other foods they can find.

Scientists have pondered two main ideas to explain the behaviour of modern hunter-gatherer men. One suggests the men are doing their best to find food for their families – and if they come home with nothing, it’s because it was not possible to find food, leaving them to rely food gathered by their wives and possibly other men to share meat with them. The alternative scenario suggests men are trying to hunt for large game, and so they might pass up smaller animals because the goal is not so much to feed their families, “but more to show off,” explains Colette.

Contradicting both hypotheses, this recent study found Hadza hunter-gatherer men actually ate most of the food they found, bringing back less than less than 10% of what they collected. They also had a keen taste for honey, consuming all they could when they found it. In fact, during the researchers’ observations, honey was found and eaten roughly every other time a hunter left camp to hunt and they ate most of it – providing over 85% of all the calories Hadza men consumed before bringing anything home for others. They weren’t just snacking, either – they were eating 2,405 calories per day on average.

“What we found does not support either of these ideas very well,” says Colette. “They neither showed off, nor killed themselves to bring the food they found home for their families. They usually ate what they needed and returned with the rest.”

These new findings don’t apply to all hunter-gatherer groups, says Rebecca Bird, an anthropologist from Penn State University in the USA, who has worked extensively with the Martu people from central Western Australia, who still hunt and gather using ancient traditional customs.

During her research, Rebecca observed Martu men eating only minimal amounts of food during their hunting trips – “just enough to keep from collapsing with hunger,” she says.

“For the older people, I’ve even seen them come across a tiny patch of fruit and eat only one or two, and save the rest to share amongst everyone sitting around the fire at the end of the day.” A Martu woman peels flesh out of a cooked parnajarlpa (goanna) she has caught. (Image: Frances Andrijich)

Martu men also go out on their own or sometimes in pairs but, unlike Hadza, they bring back most of their bounty – and Rebecca thinks an important reason for this has to do with how others will see them.

“If you were to eat before you took the food back to camp, it would be incredibly selfish of you, you’d get a reputation as a greedy person, and you would appear to be an unsuccessful, unskilled hunter. You get a lot of social capital by coming back starving and showing you can wait until everyone eats,” she says.

The behaviour of the Hadza resembles more of a “what happens in Vegas, stays in Vegas,” approach, says Colette, and so the findings of this new study add a twist to the classic story of the selfless hunter-gatherer man.

So why are the Hadza eating most of the food they find, while the Martu share?

Rebecca says there may be more at stake for the Martu than just bringing home the bacon.

“Maybe the Martu are so generous because they are building trust for cooperation in other ways, which might be due to their highly unpredictable environment,” she says. “Men in particular don’t hunt cooperatively very often, but they do cooperate in ritual business and build alliances very carefully to avert possible fights. In the past, alliances were very important for obtaining marriage partners.”

The Hadza, by contrast, do not form complex or long-standing political alliances, says Colette. “The Hadza are very egalitarian […] this means trying to get social prestige has the potential to backfire, and make a Hadza man look like he is trying to be a leader –which is something they resist as a group,” she explains, adding, “Most of our previous ideas about how Hadza men shared came from large game, which is relatively rare and treated differently from other foraged foods. It is shared widely perhaps because it is fairly rare to get and can’t be eaten by a single person before it goes bad.”