Everest and I: Sue Fear’s treacherous ascent of Mt Everest

The following extract is from Sue Fear’s 2003 story about her ascent of the highest peak on earth, Mt Everest.
By Sue Fear • July 11, 2018 • Reading Time: 3 Minutes IT’S 11.15pm. Dawa and I have had about three hours sleep and spent the past hour making a drink and strapping on boots and harness, ready to leave Camp 4. We’re on oxygen all the time, which isn’t always convenient when moving around.

Climbing steadily under torchlight, we clip into any ropes we find, regardless of how thin and frayed they look. I’m fully focused on climbing up the rock slabs and cracks, although it’s hard to see my feet over the oxygen mask. The night is still, and, because of the warming weather, there’s little snow on the steep rocks, making it easier to find hand and footholds.

Travelling about 50 m behind two other climbers in our group, we reach the ridge and then traverse tiny ledges with a 2 km fall below. I’m sort of glad I’m climbing in the dark, as I might be overwhelmed by the sight of the drop.

Still in the dark, we reach something called the Chinese Ladder, a rickety aluminium ladder about 3 m high, leading up to a bulge in the rock. At the bulge I carefully move sideways onto a thin ledge, then haul myself up. 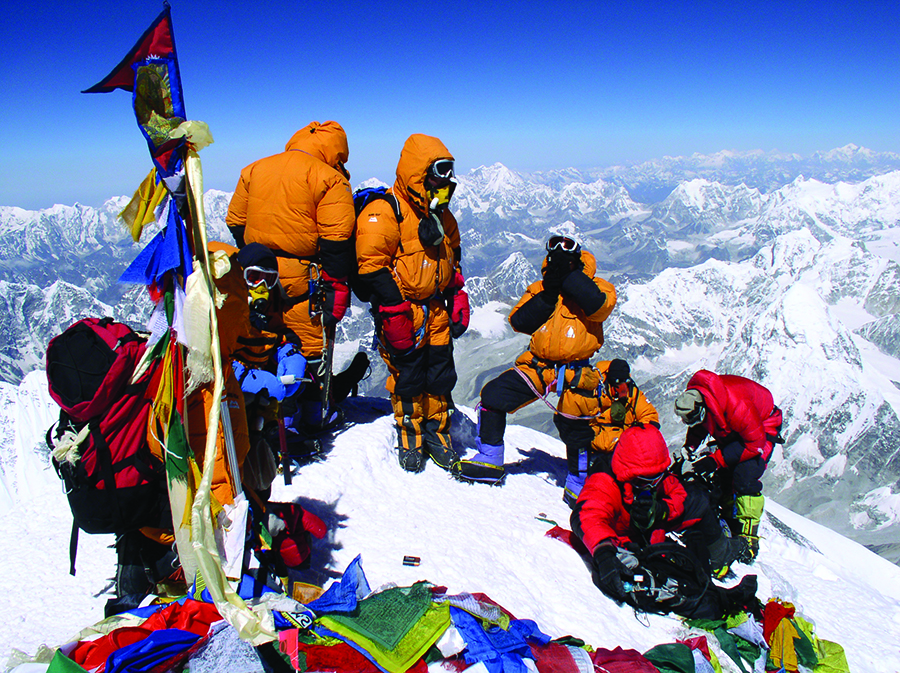 Sue Fear and other mountaineers at the Mt Everest Summit.

Ahead is the final summit dome, and I have a rush of excitement. “This is it,” I think. “I’m actually going to do it. I’m going to reach the top of Mt Everest.” Early morning light streams across from the east, lighting Lhotse and Makalu to my left, and Cho Oyu and Pumori on the other side. But I barely look at the scene, each step requiring my full concentration.

I stop briefly to change oxygen tanks with Dawa’s help, and find that my energy bars and borrowed water bottle have frozen solid. I’ll just have to eat snow and run on adrenaline.

The route doesn’t let up until the final few steps, testing me to the very end. Finally I’m there.

It’s 7.15 a.m. on 31 May, with a cloudless sky and just a light breeze. Few climbers who make the summit get such an incredible, clear view. Before me are hundreds and hundreds of peaks, a true 360-degree panorama, and tears well up as I look around, taking in my past climbs. After years and years of dreaming, climbing and trekking, I’d finally reached Everest’s summit.

I look down the ridge of the South Col and don’t see climbers approaching from the Nepalese side. We take some photos, and enjoy the view for a few brief minutes. I dedicate the climb to my dad, who died suddenly last year.

Within a week, I’m back in Aus-tralia. Having climbed Everest, I feel as though I can deal with almost any-thing the world throws my way.

Sue Fear was named Australian Geographic’s Adventurer of the Year in 2003. She passed away in 2006 while descending the summit of Manaslu in Nepal.