Although winter temperatures in Australia are not usually low enough to freeze our lakes and rivers, this certainly hasn’t stopped us getting our skates on.
By AG STAFF • July 2, 2020 • Reading Time: 2 Minutes • Print this page 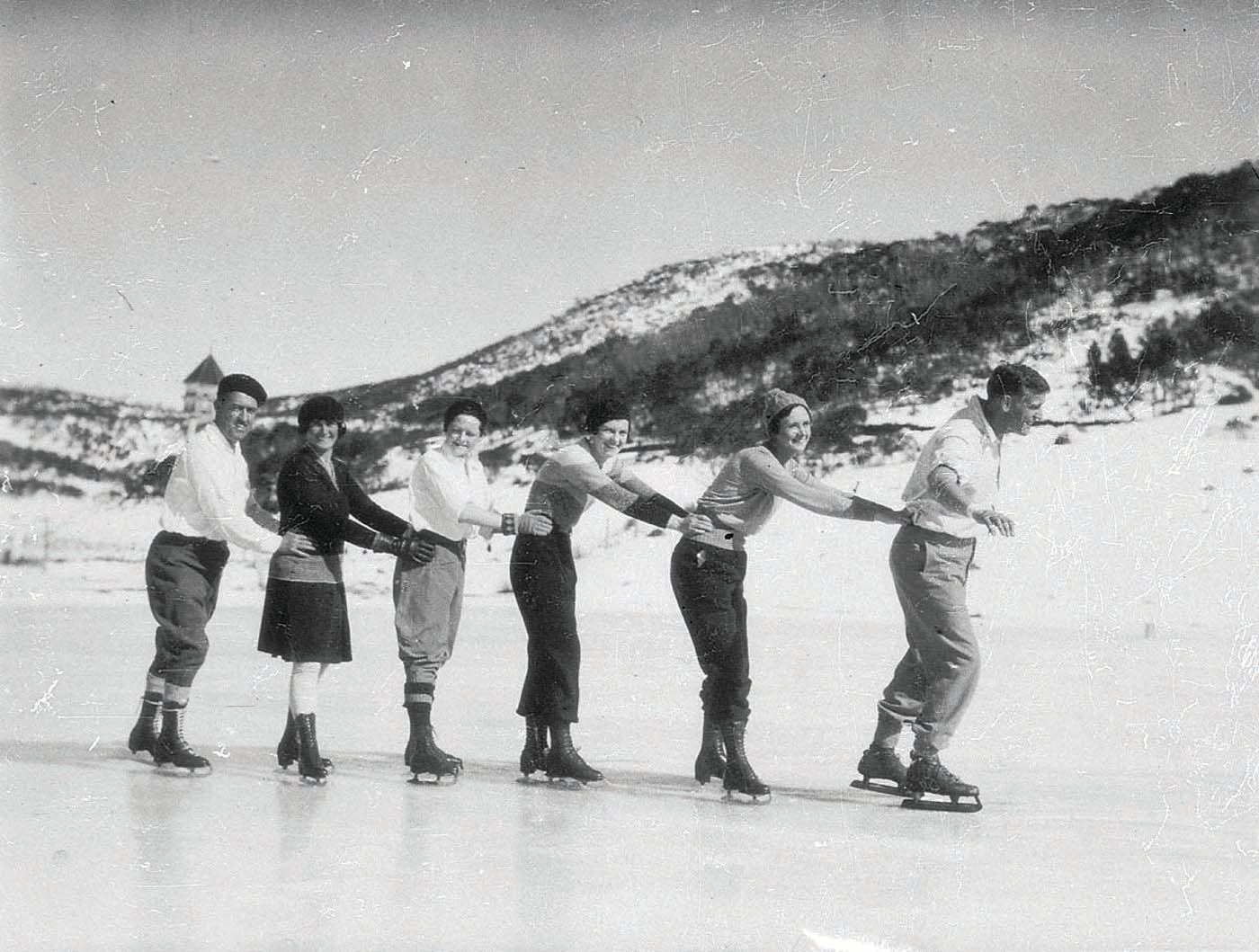 With AUSTRALIA’S shortfall of snow and ice, it’s not surprising ice-skating was virtually unheard of here until the 1890s. Those originally from colder climates would nostalgically lament their youthful rosy-nosed, frozen-toed days of gliding across the ice.

Rollerskating had become enormously popular in the 1860s when a design innovation led to skates becoming more manoeuvrable and affordable. Skating rinks opened around the country from Kalgoorlie to Cairns, but rollerskating still wasn’t viewed so much as a sport in itself but as a substitute for the delights of ice-skating. Rinks were decorated with alpine scenes, evergreen trees around their edges and glowing coloured lanterns above, with floors often covered in chalk to simulate ice.

It was only in the late 1890s that reports of ‘real’ ice-skating in the Australian Alps began to appear regularly in the press, as the newly formed Alpine Club, led by photographer Charles Kerry, began exploring around Kiandra and Mt Kosciuszko and promoting the thrills of winter sports.

With the creation of shallow artificial lakes, such as that on Diggers Creek in front of the Hotel Kosciusko (as it was spelt then, with no ‘z’) and on Lake Catani at Mt Buffalo, skating on ice became a far more likely prospect for visitors making the journey to the mountains in winter. People who had never even seen snow before embraced the sport, encouraged by newly formed state government tourist bureaus.

The introduction of Kodak’s pocket and box brownie cameras, and the accompanying growth in popularity of amateur photography, also coincided with these developments in alpine tourism. Ads in popular magazines such as The Bulletin suggested that readers “take a Kodak with you to the snow country – and carry home your holiday in pictures that will last for ever”.

These photographs, stuck carefully into albums, record many joyful excursions onto the ice, with skaters waltzing, twirling, laughing – and falling. They show skaters sensibly kitted out in layers of wool, often jodhpurs or breeches, with hand-knitted socks and homemade jumpers.

The heyday of Alpine skating on naturally occurring ice had really come to an end by the 1970s, as temperatures warmed (see page 52). Fortunately for Australia’s skating enthusiasts, however, another technological development had made its mark. Refrigeration had led, in 1904, to the construction of an indoor ice rink in Adelaide. Rinks soon followed in Melbourne and Sydney.

These ‘Glaciariums’ were as popular as the earlier rollerskating rinks, making ice-skating much more accessible (not to mention predictable). Even Australia’s first Winter Olympian, Ken Kennedy, had never skated outside before heading off to compete as a speed skater in the 1936 Winter Olympics in Bavaria.

This article was featured in Issue 157 of Australian Geographic.

See more
Wollemi: Ancient trees get NSW bushfire protection
Rare pink flannel flowers bloom after bushfires
Birds that play with others have the biggest brains – and the same may go for humans
Doggone it: Tassie tiger skull most similar to wolves, not other Aussie marsupials
Sea lion diagnosed with tuberculosis triggers public health concerns
Three new carnivorous sponges found in Great Australian Bight
Dad gives birth to 100+ young – looks like he’s sneezing
Perenties fight to (near) death
An ocean like no other: the Southern Ocean’s ecological richness and significance for global climate
The cicada’s deafening shriek is the sound of summer, and humans have been drawn to it for thousands of years
National icon, the platypus, declared a threatened species in Victoria
The North Face Ultra Fastpack IV Mid Futurelight: Video gear test
The North Face Dryzzle Futurelight jacket: Video Gear Test
How you can view the ‘Great’ Conjunction of Jupiter and Saturn
Tropical North Queensland road trips: Three of the best