Wildlife carers are using the image of the mange-infected wombat joey to call for real action against the painful skin disease.
By Angela Heathcote • May 22, 2019 • Reading Time: 2 Minutes 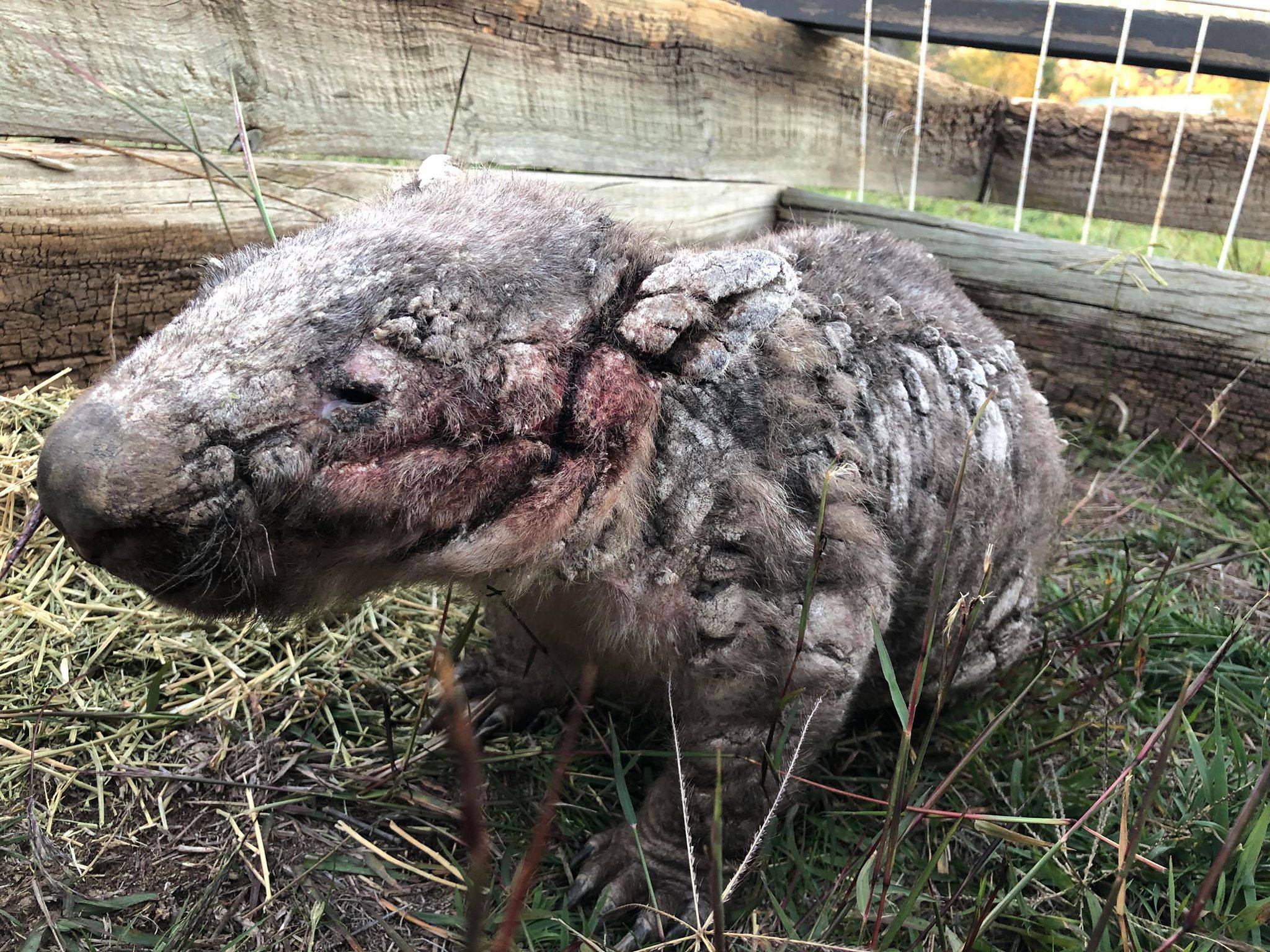 A HORRIFYINGLY BAD case of mange in a wombat has been spotted in Gordon, Canberra, over the weekend by concerned wildlife carers.

Yolandi Vermaak, who operates Wombat Rescue, was notified about the sick-looking wombat joey by Sophie Boyson, a Gordon local who was familiar with her work.

The wombat was suffering from an advanced case of mange, a disease where mites eat away at the wombat’s skin causing uncontrollable itching.

“Wombats sleep up to 16 hours a day or more, but being so itchy they don’t sleep,” Yolandi says. “Sleep deprivation is terrible.”

The scratching eventually leads to open wounds, which then attracts flies. It can also cause blindness, deafness and organ failure.

“The wombat needed to be euthanised immediately. No question. It broke my heart,” says Yolandi, adding that the animal would have been experiencing far too much pain.

The wombats remains were destroyed to avoid other animals becoming infected.

Yolandi has personally witnessed around 50 cases of mange in wombats in Canberra and surrounds in the last year.

I was contacted by one of the artists I befriended through our love of wombats, about this little one in Gordon ACT….

Mange can be treated using automated flaps on the entry of wombat burrows, which then sprays cydectin, a treatment fluid.

However it can be difficult to treat wild wombats, because they have multiple burrows and weekly treatments over a number of months can be unrealistic.

According to Yolandi, there are no groups in Canberra that work with adult or mange-infected wombats.

Instead, they are referred directly to Canberra Connect who will dispatch a ranger, who Yolandi says have their hands full with kangaroo casualties.

Through Wombat Rescue, Yolandi and some volunteers currently manage a large mange treatment program in a reserve in New South Wales, south of Canberra, which currently has 150 burrow flaps in operation.

But Yolandi says this isn’t enough, taking issue with the response from the State and Federal Government.

“It takes a couple of minutes to obtain a wombat culling license but months to get permission if you want to treat them. I can’t get my head around that.

“I have invited the Greens, Animal Justice Party and the Labor party to come with me to the reserve and become involved. They all said yes they would like to, but no contact after that.

“There is just deadly silence from the political ranks.”

Yolandi is eager to get a national program up and running, but, for now, she finds most Australians aren’t aware of mange in wombats or its effects.

“Every time I post a mange photo, there are a significant number of comments that ask questions like ‘where does mange come from’, ‘what causes mange?’, ‘I didn’t know they die of mange’ and ‘I didn’t know wombats were suffering from mange.’

“My goal is to have this level of detailed knowledge available to all Australians until they are as familiar with mange and its consequences as they are with what happened to the Tasmanian devils.”

See more
Rare local amber findings offer insight into ancient terrestrial ecosystems
Watch a funnel-web shedding its exoskeleton
Bilby baby boom just in time for Easter
We just spent two weeks surveying the Great Barrier Reef. What we saw was an utter tragedy
Australia’s most isolated people share their advice for keeping busy in lockdown
This is why bats can carry deadly disease with little effect on their health
CSIRO begins testing COVID-19 vaccines
The road to recovery: Birds are returning to Menindee Lakes
This is what the coronavirus pandemic can teach us about tackling climate change
“An underwater bushfire”: third mass bleaching event in five years on the Great Barrier Reef confirmed
Is it safe to go bushwalking?
Koalas rescued from the bushfires make a return to the Blue Mountains
Escaping the epicentre: my journey from Wuhan to Sydney
Stranded at sea by COVID-19
#BirdingatHome is officially a thing and there has never been a better time to become a birder