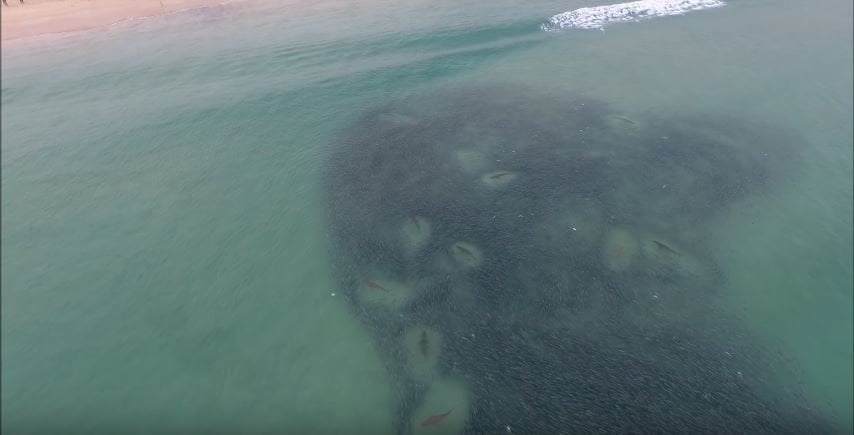 AERIAL FOOTAGE OF five grey nurse sharks feeding on an enormous school of mullet was captured at Fingal Bay, near Port Stephens on the NSW central coast earlier this month.

The incredible video was taken by drone and shared by YouTube user Damian Hurley on Sunday. Fingal Beach was closed due to the shark sightings.

Professor William Gladstone, a marine biologist at the University of Technology, Sydney, said the footage was “amazing” and fascinating for many reasons – and that it was great to see so many people enjoying the spectacle from the beach.

“Despite the numbers of sharks and fish, this is not a ‘bloodbath’: predator and prey are, for the most part, swimming together,” he explained.

“The mullet can be seen giving way to the sharks and keeping a safe distance, revealed by the haloes of clear water around each shark. The sharks turn back into the school of fish when they reach the edge of the school,” he said.

William also noted that it was surprising to see the sharks swimming at an open beach close to shore, as they are usuallly found in rocky gutters and deep crevices on coastal and offshore reefs. “This suggests that grey nurse sharks might use beaches more than we previously thought,” he said.

He added that the footage reveals the power of new technologies, such as drones, for revealing animal behaviour and enabling citizen scientists to contribute new knowledge.

Grey nurse sharks (Carcharias taurus) are a threatened species, officially listed as vulnerable. Growing up to 3m long, they feed on almost any kind of fish, crustacean, sharks, rays and squid, and play a fundamental role in the marine ecosystem along the Australian coast.