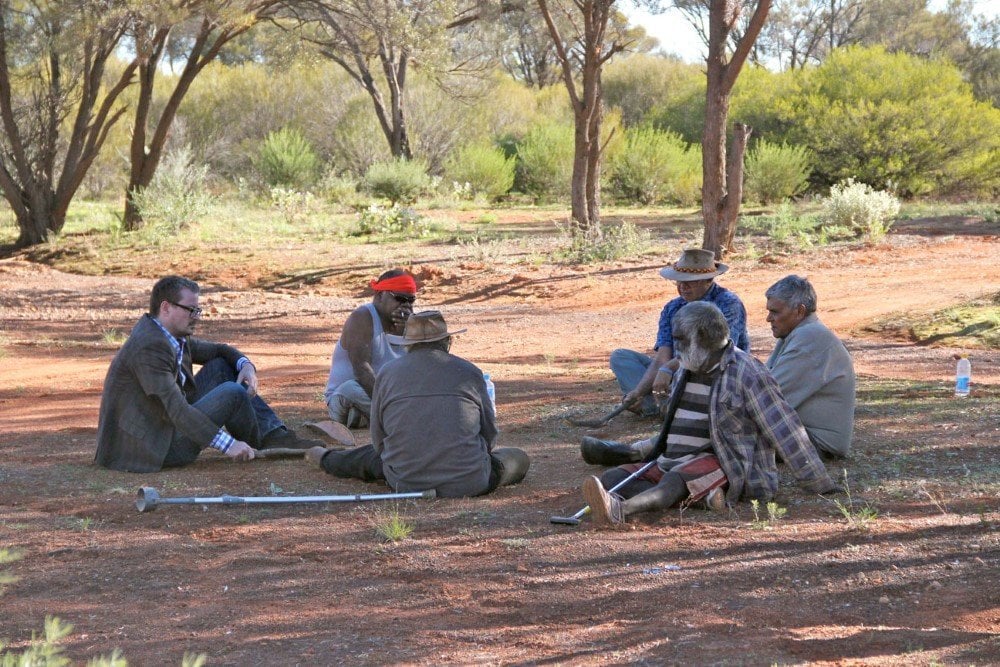 Professor Eske Willerslev from the University of Copenhagen, Denmark, talking to Aboriginal elders in the Kalgoorlie area in southwestern Australia in 2012. Image credit: Preben Hjort, Mayday Film
Reading Time: 3 Minutes • Print this page
New landmark research seeks to answer fundamental questions about when humans arrived in Australia and where they came from.

ONE OF AUSTRALIA’S most important genomic questions has been answered, with a new study finding that Aboriginal Australians and Papuans separated from Europeans and Asians thousands of years earlier than previously thought.

The study, published in the journal Nature today, also suggests that humans left Africa in a single migratory event.

Saliva samples from 83 Pama-Nyungan-speaking Aboriginal Australians and 25 Highland Papuans were collected for DNA sequencing in the hope we might finally understand when Aboriginal people arrived in Australia and where they came from. Although the scientific community could’ve guessed that Aboriginal Australians and Papuans diverged from Eurasians, this study puts a timeline on it happening at about 58,000 years ago. The study also claims that Aboriginal Australians and Papuans diverged about 37,000 years ago – around 27,000 years before the physical separation of Australia and New Guinea. That’s despite the popular assumption that separation occurred when the continent, known as Sahul, divided.

Professor David Lambert from Griffith University’s Research Centre for Human Evolution – one of the corresponding authors of the study – said it’s increasingly understood that Aboriginals arrived in Australia relatively soon after leaving Africa.

“The lineage of people that gave rise to Papuan people and Australians shows they separated from the ancestors of Europeans and Asians 58,000 years ago,” he said.

About 6000 years after Australians and Papuans, the Australian population broke into subgroups, leading to an enormously diverse gene pool. Later again, people diversified from Cape York and travelled down the east coast and on to the west.

“What that means is that there are very significant differences between the genomes of people in the east and the west,” David said. “That’s the level of differences between native North American Indians and the native people of Siberia, and, of course, ours is just in the one continent.” Associate Professor Darren Curnoe, a human evolution expert from the University of New South Wales, who was not involved in the study, said he is cautious of the findings but that they help fill a major void in understanding the origins of two of the world’s great populations – Indigenous Australians and New Guineans.

“This new work broadly shows that Australia was settled only once, without clear evidence for later migrations from far off places like India,” Darren said. “This new work might finally mark the death of this unfortunate 19th century idea.”

Scientific discoveries aside, David said the level of partnership in the project between scientists and Aboriginal Australians is a landmark.

“Having nine Aboriginal elders as authors on the paper is really important,” he said. “I think it signals a new history of scientists working with indigenous people.”

The paper, A Genomic History of Aboriginal Australia, is one of three published in Nature today, focussing on genetic diversity and the migration of modern humans out of Africa.