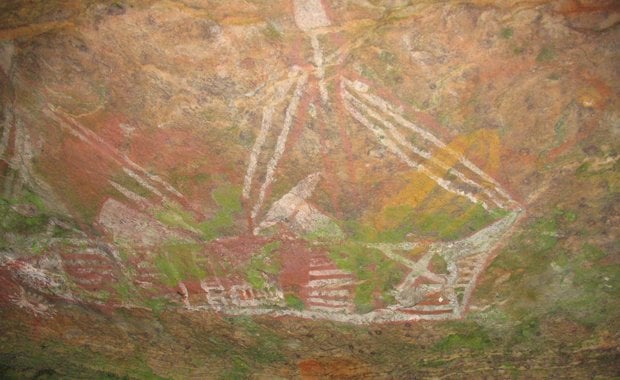 Rock art discovered on an island off the NT may depict the first Europeans to arrive in Australia. (Credit: Mike Owen)
Reading Time: 2 Minutes • Print this page
Ancient rock paintings discovered on an Australian Geographic expedition offer a new view of history.

AN EXPEDITION TO A REMOTE Northern Territory island has uncovered rare indigenous rock art that could depict the first seafarers to reach Australian shores.

The artworks show vessels which may pre-date the arrival of Dutch explorers in the 17th century, as well as a steamship, and figures wearing hats and trousers.

The seven-day expedition, sponsored by the Australian Geographic Society, headed to the Wessel Islands last month where five 1000-year-old African copper coins were discovered by a RAAF serviceman in 1944.

The expedition team, led by Professor Ian McIntosh, an Australian anthropologist at Indiana University in the US, searched the island for clues, eventually coming upon several caves filled with the Aboriginal rock paintings.

Among whales, snakes and fish, the ancient but as yet un-dated art depicts white men with trousers and guns, as well as many ships of different sizes.

Mike Owen, expedition leader and heritage consultant in Darwin, NT, says the find is “spectacular”, adding that the most fascinating artwork depicts a dedicated steamship with a visible propeller. Figures wearing hats and trousers are depicted among the artwork. (Credit: Mike Owen)

“There are numerous vessels of diverse configuration, including a nice little pearling lugger,” Mike told Australian Geographic. “To date no-one has reported ever seeing a ship with a propeller in cave art before, so it could be most important.”

The rock paintings, together with the coins from the ancient African kingdom of Kilwa, have led to speculation that the northern parts of Australia may have been visited by seafarers before 1606, when Dutch explorer Willem Janszoon became the first known European to reach Australian shores.

The expedition also found a piece of timber believed to be deck bracing for an old sailing ship. Though it is yet to be dated, the timber could support the theory of a shipwreck during which the coins washed ashore.

Tim Stone, the group’s geomorphologist, speculates the coins could be from an Arab ship, similar to a wreck discovered off Sumatra in 1998. Tim adds the coins could also be “from a Portuguese ship, as it is possible that they were making contact with Aborigines in the north and may have had Kilwa coins in their possession after destroying the African kingdom in 1505.”

Supporting the shipwreck theory, Mike says one vessel appears to be on rocks with “her back broken, which explains how the artist knew that there was a propeller below the waterline.”

“As it stands there are still many questions yet to be answered,” says Mike. “We have certainly refined the questions and will soon be in a position to report back.”

A full report from this expedition will appear in the Australian Geographic print edition in early 2014.