Little penguins in Sydney get check-up 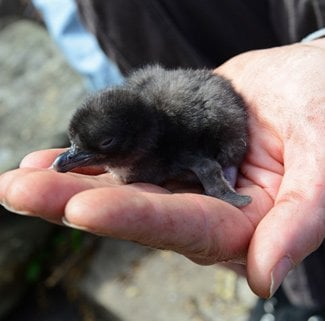 One of the first of this season's new little penguin hatchlings gets a health check at North Head in Manly, Sydney. (AAP)

THEY MIGHTN’T BE MUCH more than little balls of fluff but they’ve claimed an enviable view of Sydney Harbour.

Such prime real estate is, however, fraught with danger for the newest additions to NSW’s colony of endangered little penguins (Eudyptula minor), the smallest species of penguin, which typically grow about 30cm tall and weigh 1kg.

Scientists from the National Parks and Wildlife Service (NPWS) on Tuesday inspected the first of this season’s new hatchlings at North Head in Manly, checking the chicks’ length, weight and general wellbeing.

With 120 penguins making up the state’s only mainland breeding colony, there’s the potential for hundreds of hatchlings to be born every year – but less than 10 per cent of them survive.

“These beautiful balls of fluff have a long road to travel and many obstacles to overcome if they are to make it to adulthood and have chicks of their own,” said Melanie Tyas of NPWS.

“The main risks to the penguins are boat strikes – and that’s becoming a lot more prevalent unfortunately – (as well as) fox attacks and dogs. There seems to be a lot more fast boats (in the harbour) and penguins can’t predict what those are going to do, so they often fall victim.”

Marine debris such as fishing line and everyday garbage also pose a real threat to the hatchlings.

Scientist Lisa O’Neill, who has been tracking the penguin population for around seven years, said numbers around Store Beach had stabilised over recent years.

“We’ve worked hard to try and bring penguins to that area where it’s safe and work to increase the numbers there, and that is happening slowly,” Lisa said.

“It’s vital that we look after them and protect them; it’s a dangerous area and our volunteers have played a critical role (in helping them),” the minister said.