Scientists have unearthed a fossil in Queensland of a previously unknown sabre-toothed bandicoot.
By Ellin Williams • July 9, 2010 • Reading Time: 2 Minutes • Print this page 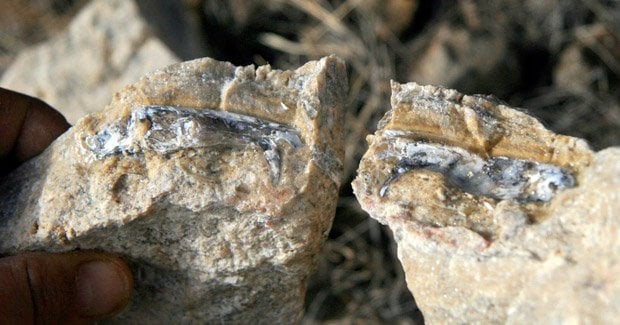 A fossil of an 18-milion-year-old sabre-toothed bandicoot has been unearthed in Queensland. (Photo: A Meyer)

PALAEONTOLOGISTS HAVE UNEARTHED an ancient fossil of a sabre-toothed bandicoot that is completely new to science.

A bizarre-looking 8-cm-long skull was uncovered by scientists in the Riversleigh area, north Queensland, and is still encased in limestone. Scientists are unsure of its identity, but say they have never seen anything like it before.

“At this stage, based on the shape of the skull and the size of the canines, we are looking at a small carnivorous, insectivorous marsupial, either a dasyurid [which includes quolls, antechinus and dunnarts] or a bandicoot,” says palaeontologist Kenny Travouillon from the University of New South Wales (UNSW).

Professor Michael Archer, who leads the research group at UNSW, says that the animal “may have looked for all the world like the sabre-toothed rat – Scrat – in the Ice Age movies, with a flexible nose and giant canines.” This sabre-toothed marsupial equivalent of the scrat probably ate small animlas, fruits and seeds, and used its fangs to help grab its prey or puncture fruits.

Geologist Phil Creaser from the UNSW team says that the creature is at least 18 million years old, and most likely fell into an underground cave where it died. “The site is a cave deposit and is rich with small mammal fossils. We know this by looking at the geology [and] using a new method of dating stalagmites,” he says.

The experts believe that small animals which fell into this cavern could not see the opening because of thick foliage growing over it. Phil says that, at the time the sabre-toothed marsupial lived, northern Australia was covered with dense rainforest and was home to many extraordinary and dangerous animals.

The Riversleigh excavation site in north Queensland, which was once covered by an ancient rainforest, has more than 250 fossil-rich dig sites, which have produced thousands of well-preserved specimens from between 15 and 25 million years ago. The area was inscribed on the World Heritage List in 1994.

“There are still so many things we don’t know. After 30 years at Riversleigh you would think we’d have found everything, but we haven’t. There’s always a chance of a new discovery,” Phil says.

The sabre-toothed marsupial is as yet unnamed, but Phil said they may take its unique Australian heritage into account when they officially describe it. “A lot of Australian animals are warm and fuzzy. We need something nastier, with a mean streak,” he quips.

So far Australia has produced many fossils of weird and sometimes dangerous animals. Fangaroos, for example, lived in Australia at the same time as this sabre-toothed marsupial. Several skulls of this weird kangaroo have been found at Riversleigh. It had molar teeth suited for eating plants along with sharp fangs that suggest it could inflict a very nasty bite on any would-be predator.

Scientists have also previously found, at the Riversleigh site, fossils of “drop crocs” (Trilophosuchus) – goanna-like crocodiles with immensely strong upper arms that are believed to have climbed trees and caught prey by dropping on top of them.

“Riversleigh has been extremely rewarding. Every square foot of limestone dug up reveals fossils exceptionally preserved, which would make most palaeontologists around the world jealous,” Kenny says.

Tom Rich, a palaeontologist with Museum Victoria in Melbourne says the discovery “adds one more small but intriguing bit of information to the knowledge of Australia’s past”.

Mike says that it will take two to three weeks before they start to see the whole skull emerge from the limestone and can discover just how different this weird little sabre-toothed marsupial was from its nearest relatives.