Home Blogs On This Day On this day in history: Australia’s first convict pardon

On this day in history: Australia’s first convict pardon 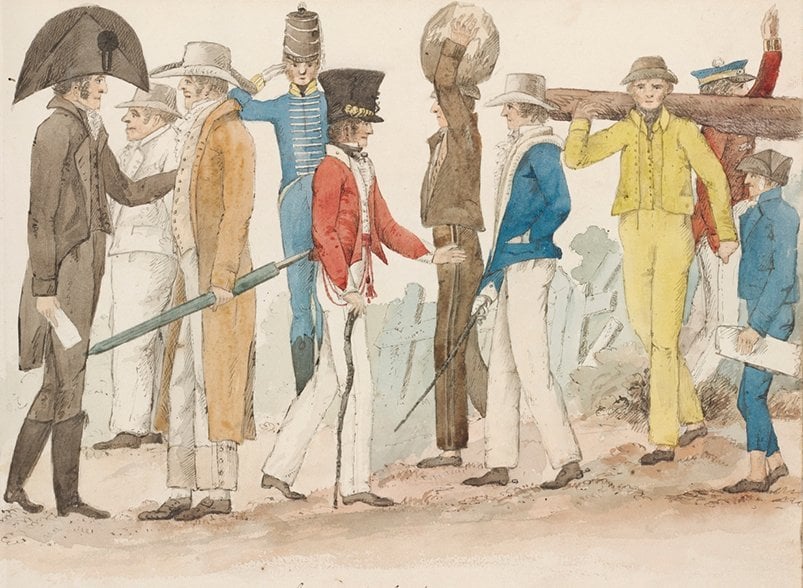 The Costumes of the Australasians by Edward Charles Close. Here, Close shows convicts, their gaolers, and free settlers, all living and working together in Australia. Image credit: Edward Charles Close/State Library of NSW
Reading Time: 2 Minutes • Print this page
Six years into his seven-year sentence, John Irving was busy helping treat patients in the fledgling colony of Sydney.

ON 28 FEBRUARY 1790, John Irving became the first Australian to be emancipated of his criminal history.

John was a medical student when he was charged and convicted of stealing a silver goblet in Lincoln, England. He was sentenced to seven years transportation to Australia.

Whilst serving his sentence, his medical skills came in handy and from time to time he was called upon to act as the surgeon on various voyages shuttling convicts from Britain. History suggests he may have acted as a relief doctor to the primary physician on board.

His exemplary service while sailing led to him to employment as an assistant at Sydney’s rudimentary hospital. Conditions were basic, and at the time he was called upon to treat the many settlers and convicts who became ill from the lack of food variety and hygiene with scurvy and dysentery. Irving, proving himself useful, gained considerable experience working alongside the principle surgeon.

As a result, Governor Arthur Phillip deemed Irving professionally competent to practice surgeries in the new colony. In 1790 he was pardoned and appointed an assistant to the surgeons. Soon thereafter, in recognition of his “unremitting good Conduct and meritorious Behaviour”, Phillip directed him to proceed to Norfolk Island in H.M.S. Sirius as assistant to Surgeon Dennis Considen.

Ralph Clark, an officer of the marines on-board at the time, who found little merit in the majority of the convicts described Irving as “the best surgeon amongst them”.

Upon his return to Sydney towards the end of 1791, Irving was stationed at Parramatta to assist another surgeon, Thomas Arndell, and was granted 12 hectares of land.

Irving died at Parramatta on 3 September 1795 and was buried in St John’s cemetery. No stone marks his grave but one of Parramatta’s streets bears his name. Judge Collins, who was a magistrate involved with the Burns murder case in which Irving acted as the coroner, said his death “was much regrette”‘ and that “his loss would be severely felt”.

Pardons continued regularly after Irving. The following year (1791) James Bloodsworth became the second Australian to be pardoned. Master bricklayer, he was largely responsible for the design and erection of Australia’s first buildings, designing the first Government House, the storehouse at King’s Wharf on the shore of Sydney Cove and many private houses. Pardons today are carried out through the Attorney’s general office.