Bec Crew is a Sydney-based science communicator with a love for weird and wonderful animals. From strange behaviours and special adaptations to newly discovered species and the researchers who find them, her topics celebrate how alien yet relatable so many of the creatures that live amongst us can be.
ByBec Crew• June 7, 2022 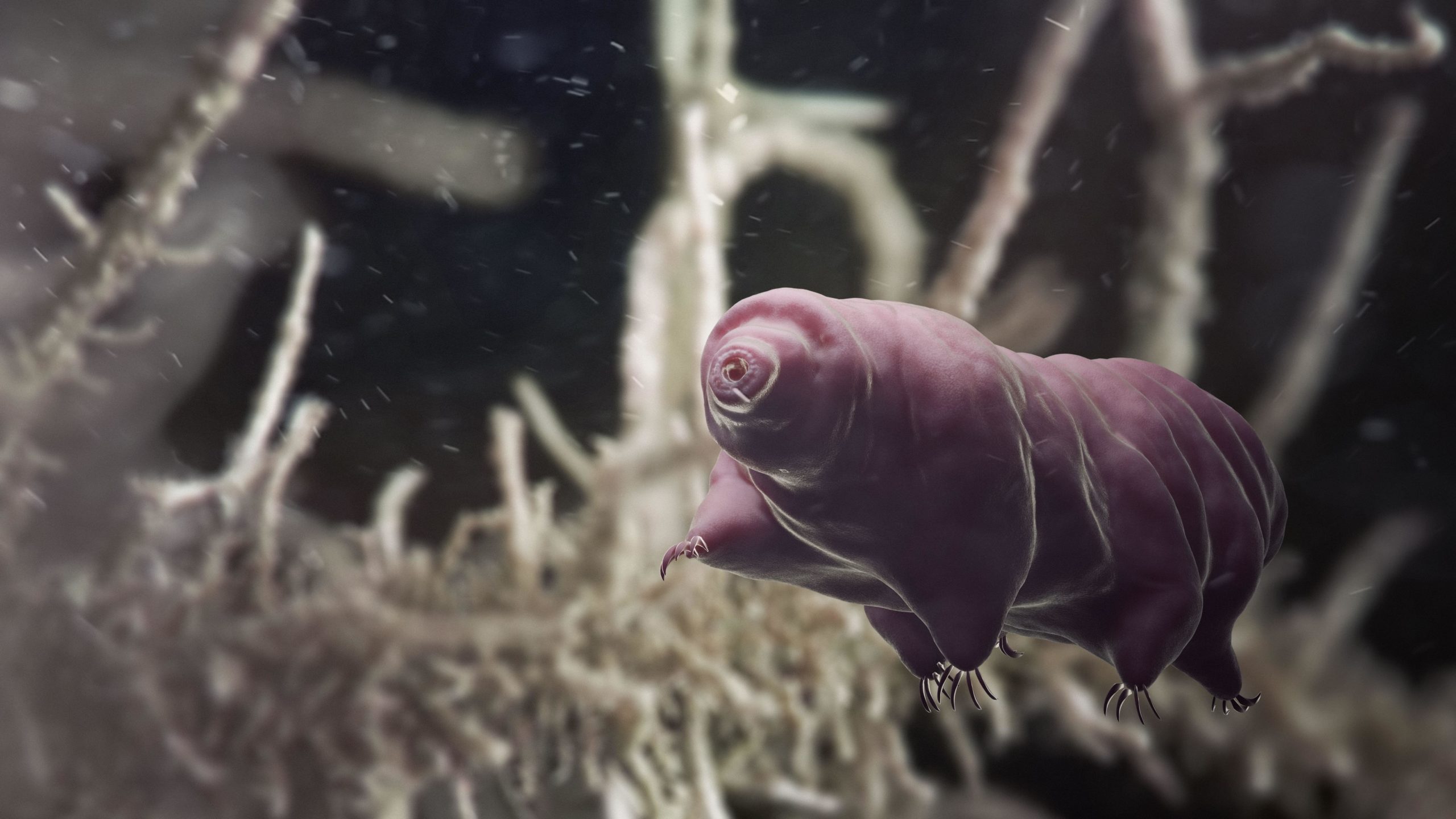 Close-up of a tardigrade (also known as water bear) swimming on a moss. Image credit: João Burini / Alamy
Reading Time: 2 Minutes • Print this page
It’s safe to say that no microscopic organism has captured hearts quite like the tardigrade, an adorable critter commonly known as the water bear.

These bizarre creatures, the largest of which grow to just 0.5 mm, are much tougher than they look. They can live just about anywhere, and can withstand environmental pressures like few other lifeforms on Earth.

They’ve survived temperatures as low as -272°C and as high as 151°C, for example, and pressures some six times greater than those registered at the deepest ocean trenches on Earth. Even radiation levels that would be fatal to humans are not an issue for tardigrades.

They can survive being starved of nutrients, oxygen and water, and have even been sent to space, a feat that earned them their other nickname – ‘space bears’. Tardigrades are so resilient, researchers estimate they’ve been kicking around for more than 60 million years.

Tardigrades represent a large group of ‘micro-animals’ – many different species which share common features such as stumpy legs that end in long, curved claws and segmented bodies covered in a thin, skin-like cuticle.

They tend to live near water sources – some are aquatic and live in ponds or slow-moving rivers, whereas others live on land, ensconced by the water droplets and dew that accumulates on moss and large plants. (That’s where their other nickname, ‘moss piglet’, comes from.)

They’re also known to live on the surface of mud, detritus and submerged vegetation, which means they could well be lurking nearby, if you happen to live in water bear territory.

In Australia, most recorded sightings of tardigrades have been around the south-eastern coast, however they’re thought to inhabit most parts of the country.

If you’re able to get to known tardigrade territory, such as the Mount Buffalo National Park in Victoria and the Blue Mountains and Mount Kosciuszko in New South Wales, it’s worth collecting a sample to take home and study. This article has a great step-by-step guide for how to do it.

A key factor that makes tardigrade collection a whole lot easier is that these amazing creatures can perform cryptobiosis – a state that allows them to withstand drying out (desiccation) over long periods. Sea-monkeys (a type of brine shrimp), which also perform cryptobiosis, are famous for their ability to be revived from a state of desiccation. This means that you can collect a sample carrying a water bear, pop it in a paper bag, and revive it when you get home, without any worries about having to keep it moist.

If tardigrades weren’t strange enough, here’s another interesting fact: most of them are female. Some genera don’t even have males at all – the females are able to clone themselves without fertilization. When it comes to resilience, water bears show that little things can be super strong, too.