Bec Crew is a Sydney-based science communicator with a love for weird and wonderful animals. From strange behaviours and special adaptations to newly discovered species and the researchers who find them, her topics celebrate how alien yet relatable so many of the creatures that live amongst us can be.
ByBec Crew• June 15, 2022 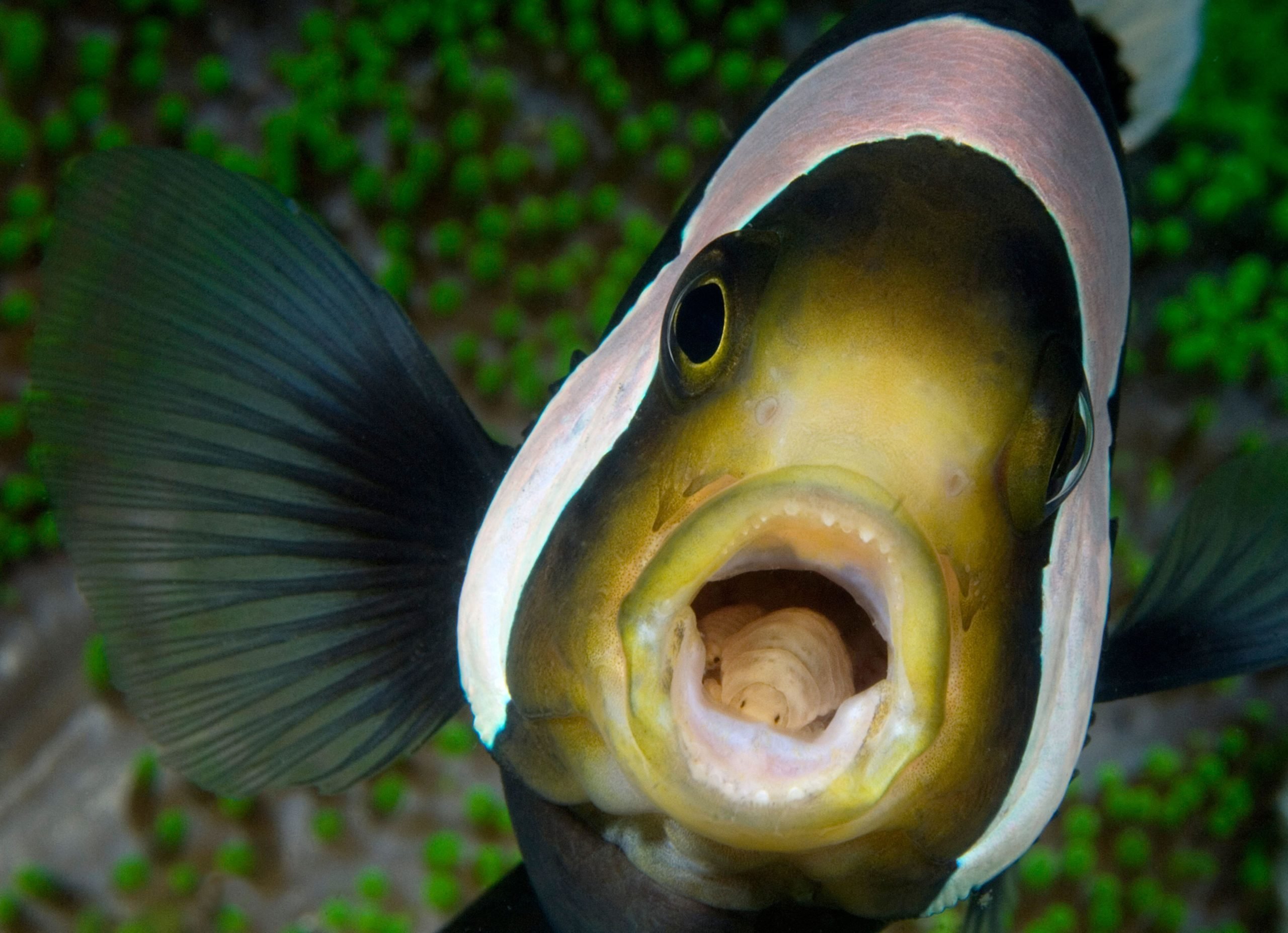 Saddleback anemonefish (Amphiprion polymnus) showing two attached "tongue" isopods (Cymothoid sp.) in its mouth. Image credit: BIOSPHOTO / Alamy Stock Photo
Reading Time: 2 Minutes • Print this page
If there’s one thing that both humans and fish can agree on, it’s that the tongue-eating louse sucks. Parasites are bad enough as it is, but one that attaches itself to various parts of the face is just plain rude.

The tongue-eating louse, pictured above parasitising a poor anemonefish, is a type of isopod – a buglike creature that you may be familiar with in the form of woodlice (or piggy slaters, as they’re sometimes known).

Isopods make up a large group of crustaceans that can live in marine or fresh water or on land. Many species feed on dead or decaying plant and animal matter, and some are filter-feeders, living off microscopic bits of plants and other nutrients floating through the water.

Some, like our friend inside the anemonefish’s mouth, are external parasites, which means they attach themselves to a host’s body (most often a fish), rather than infecting hosts internally (like a hookworm, for example).

The most famous tongue-eating louse is the species Cymothoa exigua, found in parts of North and South America. It’s notorious for its ability to attach itself to the base of the fish’s tongue, sever the blood vessels and suck the blood out until the tongue drops off, then position itself in the place of the tongue by gripping onto the remaining stump.

It’s ghoulish stuff, and as you can see in the image below, it provides the isopod with a pretty amazing home:

The behaviour not only provides C. exigua with a safe and sheltered home – a rare commodity in any ocean environment – it allows the isopod to consume as much of the fish’s own blood and mucus as it needs. It’s ingenious, especially considering the fish tends to survive pretty well with an isopod in place of its tongue.

While C. exigua is the most well-known species of tongue-eating louse, there are many more.

As scientist Melissa Beata Martin writes in this article for the Australian Museum, tongue-eating lice – or, as she calls them, fish tongue biters – can be members of some eight genera of mouth-attaching cymothoids (Cymothoidae is the family of isopods that they belong to).

There are approximately 100 species of mouth-attaching cymothoids found worldwide, many fish will be sad to know, including in Australian waters.

One example of a little-known Australian cymothoid is the mouth-attaching genus Smenispa (previously Enispa), which occurs in the tropics and subtropics, Martin reports. One species, Smenispa irregularis, has been spotted in Australian waters.

Parasitic isopods don’t just target tongues – some target the cheeks, which this fish demonstrates so miserably:

Find out more about the tongue-eating isopods in the video below: