Bec Crew is a Sydney-based science communicator with a love for weird and wonderful animals. From strange behaviours and special adaptations to newly discovered species and the researchers who find them, her topics celebrate how alien yet relatable so many of the creatures that live amongst us can be.
By Bec Crew • June 28, 2021 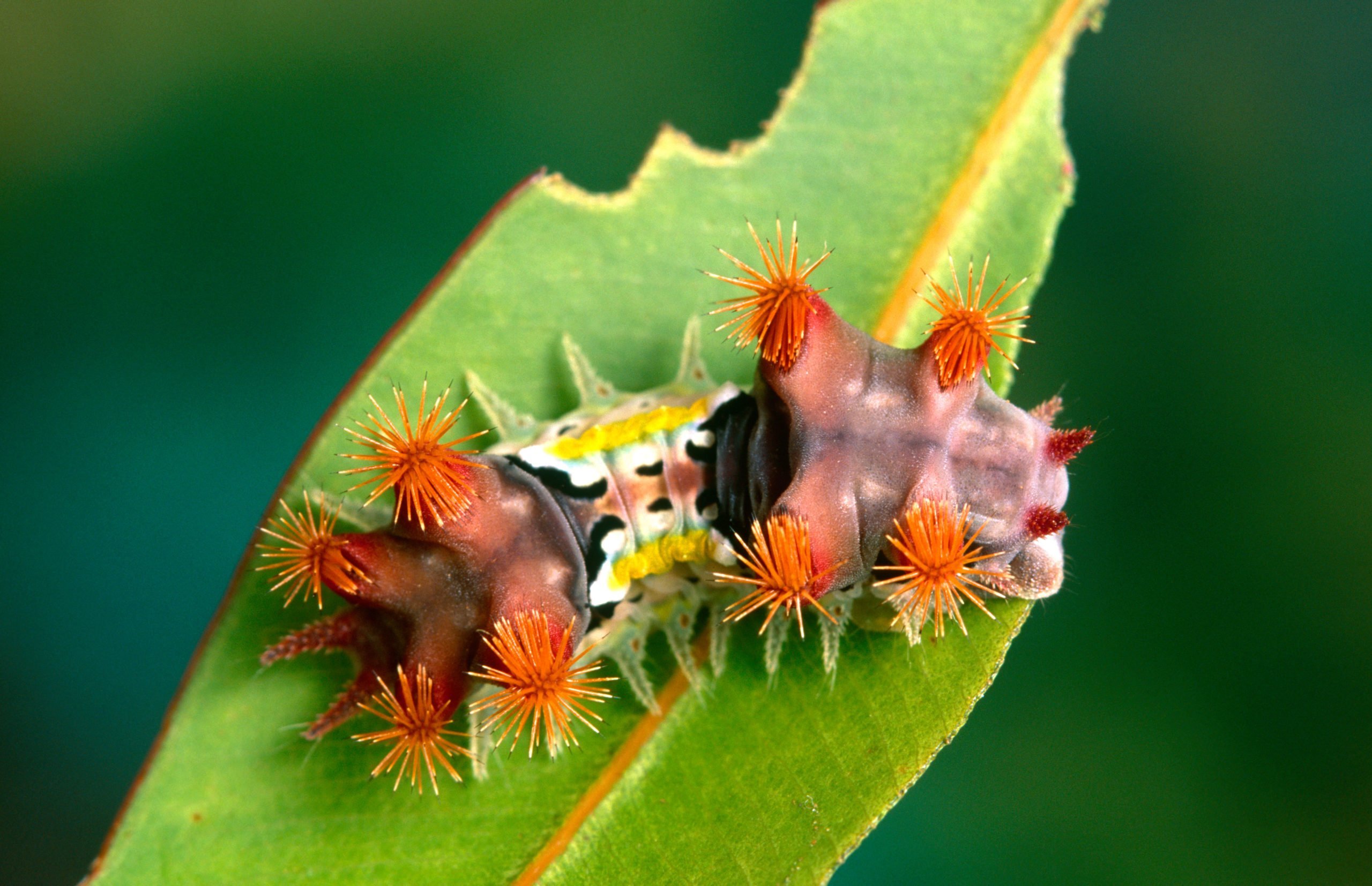 Image credit: Denis Crawford / Alamy Stock Photo
Reading Time: 2 Minutes • Print this page
With the ability to inject liquid venom into would-be predators – venom that happens to be surprisingly similar to that of wasps, spiders and scorpions – the mottled cup moth caterpillar is an intimidating critter.

With the scientific name, Doratifera vulnerans, which means “bearer of gifts of wounds”, this highly decorated insect is all look, don’t touch. Found along Australia’s east coast, including in Sydney, Canberra and Brisbane, the mottled cup moth caterpillar has dozens of spines laced with a highly potent venom that can inflict a sharp, burning sting like a bee.

The caterpillars tend to retract these spines when they’re relaxed, however even the lightest touch can cause some serious irritation.

This venom is strangely complex. In fact, it’s unlike anything scientists have seen in a venomous animal before. A team led by Dr Andrew Walker from the Institute for Molecular Bioscience at the University of Queensland have been studying this caterpillar for years and have finally unlocked the secret to its success.

Turns out, the venom is made up of a whopping 151 individual toxins from 59 different families. Of particular interest is the toxic compound, cecropin, which is known to kill harmful bacteria and parasites that affect livestock.

Just like the venom of certain spiders, the venom of the mottled cup moth caterpillar could be an untapped source of inspiration for new medicines with antibacterial and anti-parasite properties, Dr Walker and his colleagues published in a recent paper in the journal PNAS.

The mottled cup moth belongs to the cup moth Family Limacodidae, so-called because they build cup-like cocoons that look just like gum nuts. The caterpillars are nicknamed spitfires and warships, for obvious reasons.

Funnily enough, not all caterpillars of Limacodidae moths look like our spiny friend, who is of the ‘stinging nettle’ variety. There’s also the ‘gelatin’ caterpillar group, members of which look like gummi worms or spaceships.

By contrast, the moths of both species are very plain.

Here’s a cup moth caterpillar showing off its armoury: