Like a bird that was dipped in sunset colours, Mrs Gould’s sunbird is as pretty as a picture. Named after 19th century British artist, Elizabeth Gould, it’s been enchanting birders for centuries. 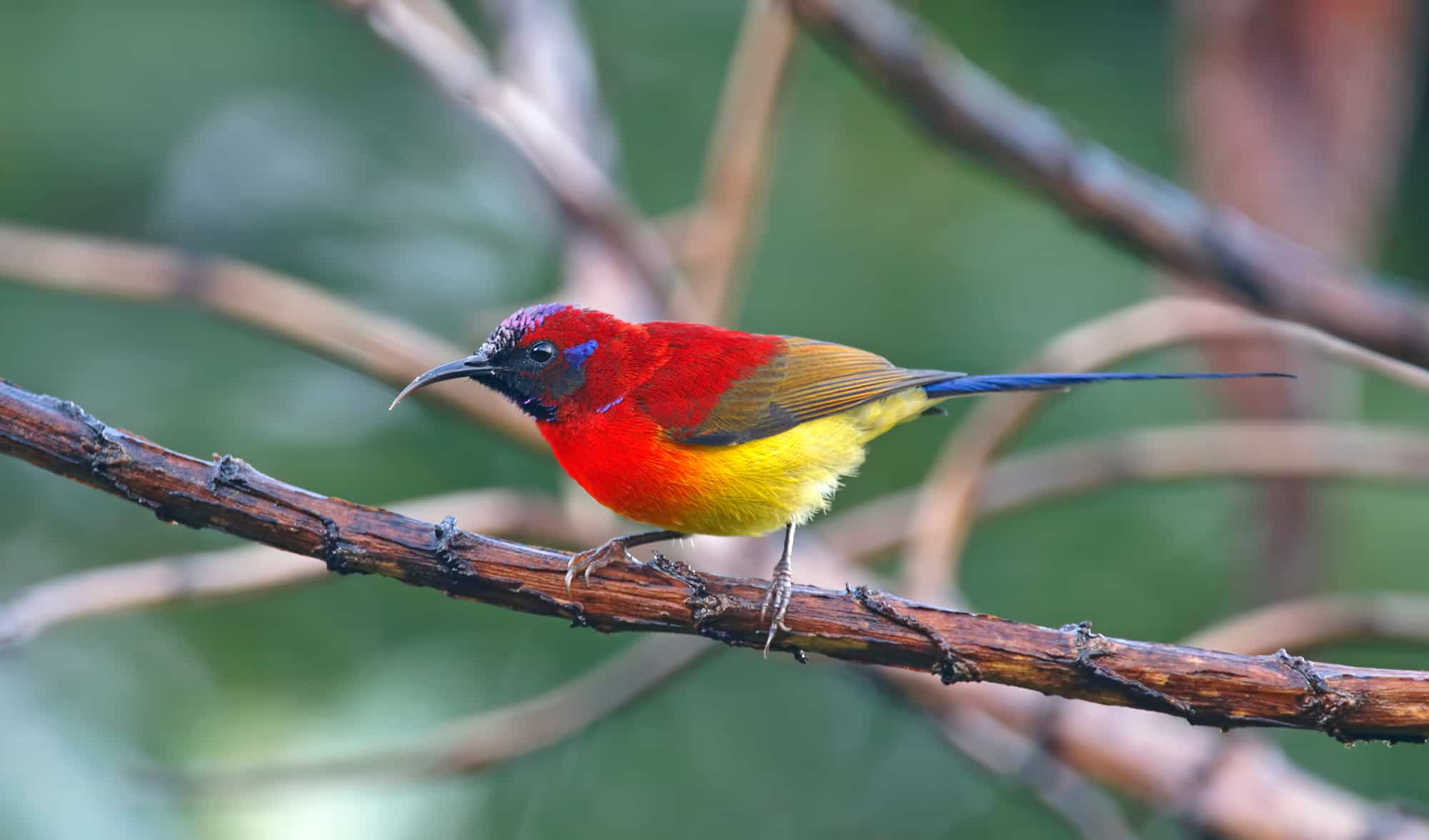 WITH AN extensive range that includes China, Vietnam, Thailand, Laos, and India, Mrs Gould’s sunbird (Aethopyga gouldiae) thrives in warm, tropical and subtropical forests. It belongs to the sunbird group, which, together with the spiderhunters (genus Arachnothera), make up the Nectariniidae family of passerine birds.

Sunbirds resemble hummingbirds in the Americas and honeyeaters in Australia, as they’ve all evolved to suit their nectar-eating lifestyle. When they encounter narrow, tubular flowers with impossible-to-access centres, they simply poke a hole through the bottom with their long, sharp beaks and siphon out a meal.

Some species will hover over a flower like a hummingbird, but most will find themselves a perch while they feed – a far less energy-intensive exercise.

Here’s another look at that beautiful beak: Mrs Gould’s sunbird was first discovered by Irish zoologist, Nicholas Vigors, who in his career described 110 new species and contributed to one of John Gould’s seminal ornithological texts. Vigors named the bird in honour of Elizabeth Gould.

John Gould might have made his name as the father of Australian ornithology, but his wife Elizabeth was a tremendous illustrator, who in the early 1800s contributed to a huge number of ornithological texts, including Charles Darwin’s The Zoology of the Voyage of H.M.S. Beagle and Gould’s The Birds of Australia.

Sadly, the height of her fame came after her death. A collection of letters written by Elizabeth during her time in Australia were discovered and presented to Mitchell Library at the University of Sydney in 1939.

Elizabeth Gould had another stunningly beautiful bird named after her, the Gouldian finch, one of Australia’s most colourful birds. It was named by John Gould in 1844, three years after Elizabeth’s death.

Mrs Gould’s sunbird never made it to Australia, but there’s one species of sunbird that did: the olive-backed sunbird (Cinnyris jugularis).

This pretty bird, which ranges from southern China and South East Asia to Queensland and the Solomon Islands, sports olive green and daffodil yellow plumage. The males are adorned in iridescent blue feathers that run from their forehead to their chest: To spot an olive-backed sunbird, mangroves or the edge of a forest in far-north Queensland would be a good place to start, but you might get lucky – occasionally they’ll show up in parks and gardens.

Here’s one filmed in Singapore: