If you own a cat, you’re probably used to surreptitiously whisking a harried skink away from the paws of death, leaving a twitching tail behind as a sad consolation prize. YOU MIGHT FEEL sorry for the skink as it runs away with a clipped backside, but it will have a new tail in time. The same goes for salamanders ­­– chop off a limb, and it’ll grow a new one.

Heads, on the other hand, are trickier. Brains? Almost impossible. I say almost, because a special type of worm has figured it out, and scientists have just discovered that they’ve been evolving the ability relatively recently -– and even stranger, independently from each other.

Ribbon worms (Nemertea) are a group of slender, slimy creatures that mostly live in the ocean, but some are found in freshwater and terrestrial environments.

They’re usually only a few millimetres wide, but many species grow to more than a metre long. There are even reports of a ribbon worm that stretched a whopping 54 metres long, making it the world’s longest animal (a blue whale grows to 30 metres).

They’re equipped with a long, tubular proboscis, which is kept hidden inside them, just above their mouth. When prey or predator comes close, the proboscis is turned inside out and unfurled, ejecting a web of sticky venom:

Ribbon worms are found all over the world, including Australia, such as the truly bizarre Argonemertes australiensis, owner of this bonkers egg-case, spotted in Tasmania: Surprisingly little research has been done on the regenerative abilities of ribbon worms, and until recently, one species in particular has been getting all the attention.

Known as the ‘champion of regeneration’, Lineus sanguineus has some of the highest regenerative abilities of any species on the planet. Found in the north-eastern Atlantic Ocean and off the coast of North America, it’s so fragile, if you try and pick it up, it’s likely to fall to pieces in your hands.

It’d kind of look like this, but unlike the unfortunate ribbon worm in the video, L. sanguineus is able to regenerate its broken parts into brand new worms in a matter of weeks:

Even a piece that’s one-200,000ths of an individual can grow into a whole new worm, which is the equivalent of re-growing a 68kg person from just 0.3 grams of tissue.

L. sanguineus is such a prodigious regenerator that it’s given scientists the impression that ribbon worms in general are great at regeneration. But until recently, no one had done the research.

There was so little scientific literature about head regeneration in ribbon worms that a team from the US, Spain, and Argentina decided to investigate.

Having collected random species along the coasts of the US, Argentina, Spain, and New Zealand, they discovered four species with previously unreported head regeneration, and three more hidden in old scientific papers.

Here’s what the process looks like (note the growing heads): 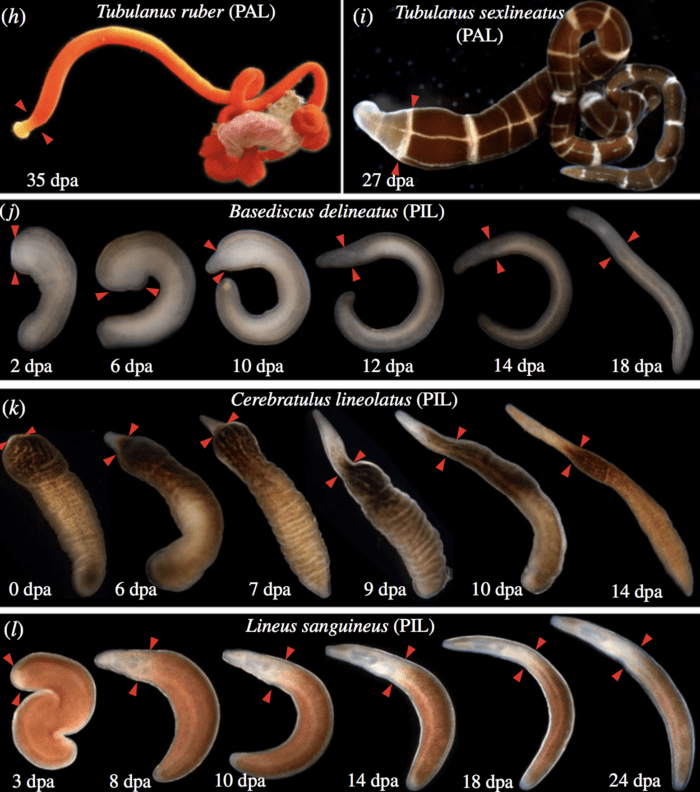 With this information, they were able to confirm for the first time that ribbon worms didn’t gain their head-regenerating ability through a common ancestor hundreds of millions of years ago – it evolved independently at least four times, and only about 10 or 15 million years ago.

That might not sound all that recent, but the common ancestor of salamanders was regenerating its limbs some 290 million years ago. It’s anyone’s guess as to why evolution bestowed head regen on just seven of the 1,500-odd ribbon worm species out there (that we know of), but I doubt they’re complaining.

See more
The regent honeyeater is a beautiful bird in big trouble
These ocean drifters are full of the Christmas spirit
The Dracula parrot is as intimidating AF
The blue-throated barbet is ridiculously good-looking
NZ’s jewelled gecko has some bizarre colour patterns
The dragontail butterfly is like a dream
The fawn-footed melomys is as cute as a button
Mrs Gould’s Sunbird is a tiny delight
The flamboyant cuttlefish stomps around like a dog in a wheelchair
Meet the rainbow serpent: the white-lipped python
The world’s tiniest bird-of-paradise looks like a sad bean
Meet the Dibbler, one of the world’s rarest mammals
The little red kaluta is making our hearts burst
The harlequin tree frog flies on ruby wings
Victoria’s riflebird is just out here dominating