Bec Crew is a Sydney-based science communicator with a love for weird and wonderful animals. From strange behaviours and special adaptations to newly discovered species and the researchers who find them, her topics celebrate how alien yet relatable so many of the creatures that live amongst us can be.
By Bec Crew • September 18, 2018 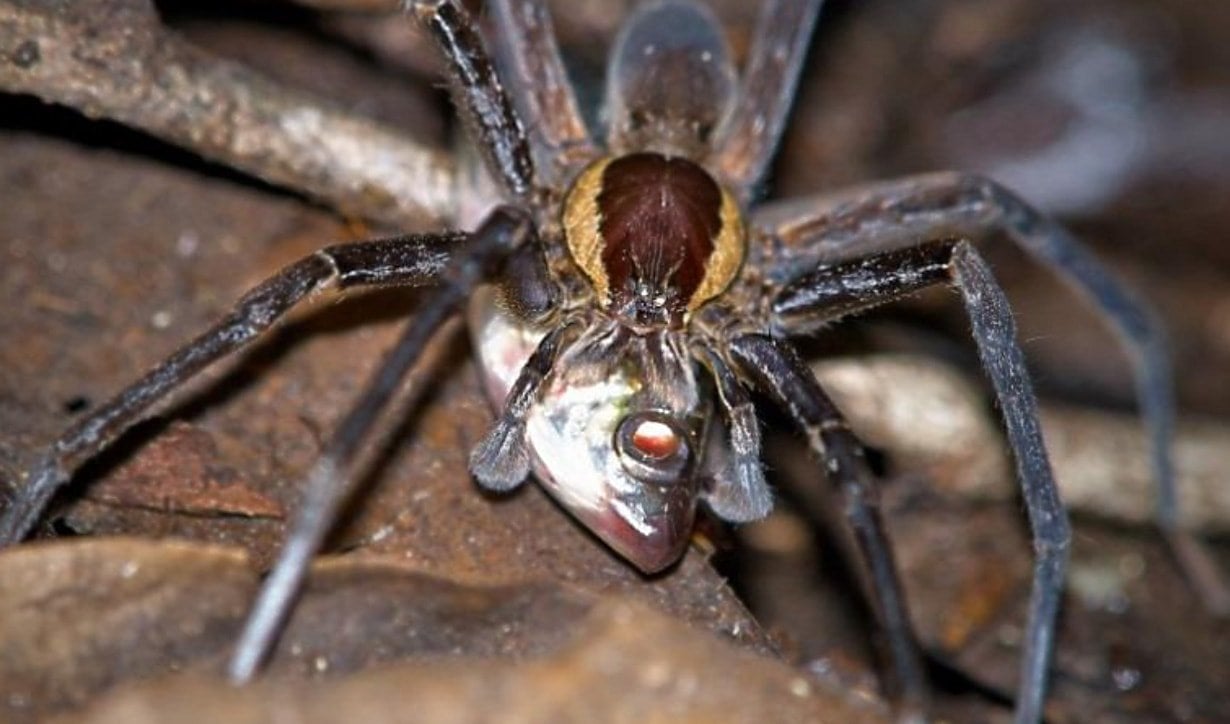 FOR MANY OF US, the idea that water itself is no escape from spiders is not great. They lurk in our bushlands, our gardens, our back sheds, our bedrooms – we’ve already got snakes to think about in the water, do we have to worry about spiders in there, too?

The short answer is, not really, because fishing spiders are far more interested in fish than they are in biting humans. The more complicated answer is yes, because my irrational fear cares not for your logic.

Regardless of how you feel about spiders existing in water, they’re there, and for once, we can’t just blame Australia for this nightmare. Fishing spiders are found on every continent on Earth, bar Antarctica.

Most of them belong to the Dolomedes and Nilus genera, which means fishing spiders aren’t impossibly tiny cuties à la jumping spiders. Nope, these are sizeable spiders – the leg-span of a female Dolomedes can stretch to as much as 9 cm long.

Fishing spiders spend most of their time at the water’s edge, camouflaging against rocks or foliage alongside shallow freshwater streams, rivers, lakes, ponds, and swamps.

Oh, and sometimes they’re found hauling their prey up onto the dock, as this unsettling series of photos from Canada and the US reveal:

Dolomedes in particular are exceptional at swimming, diving, and walking on the water’s surface, which helps them to snatch and eat nutrient-rich meals of local fish species.

And these aren’t tiny baby fish – they can often be 6 cm in length, which is more than double the average fishing spider’s own body size (minus the legs).

No prizes for guessing where the biggest fish caught by a spider was from, because yep, it’s Australia.

According to a definitive paper on fishing spiders by biologists Dr Martin Nyffeler from the University of Basel in Switzerland and Dr Bradley J. Pusey from the University of Western Australia, the largest fish on record captured by a fishing spider was a goldfish in a garden pond in Sydney measuring 9 cm in length and weighing approximately 10 g.

In Australia, fish predation events have been witnessed in suburban gardens of Adelaide, Brisbane, Lismore, and Sydney, and there have been reports of fishing spiders hunting on the fringes of slow-flowing streams in New South Wales and Queensland.

One such species is Dolomedes facetus, found in eastern Australia, and cousin to the aptly named giant water spider (Megadolomedes australianus) which, just, ugh, I hate it.

When the mother spider senses that her eggs are about to hatch, she goes ahead and builds a nursery ‘tent’, into which she manoeuvres her ripening egg sac. She then stands guard atop the tent and, okay I’m done, this arachnophobe has had enough.

I’ll leave you with this delightful footage of an African fishing spider feeding on a frog: