Home Blogs Creatura Blog Why fly when you can shuffle? This curious bat prefers the ground

Why fly when you can shuffle? This curious bat prefers the ground

Bec Crew is a Sydney-based science communicator with a love for weird and wonderful animals. From strange behaviours and special adaptations to newly discovered species and the researchers who find them, her topics celebrate how alien yet relatable so many of the creatures that live amongst us can be.
ByBec Crew• January 9, 2018 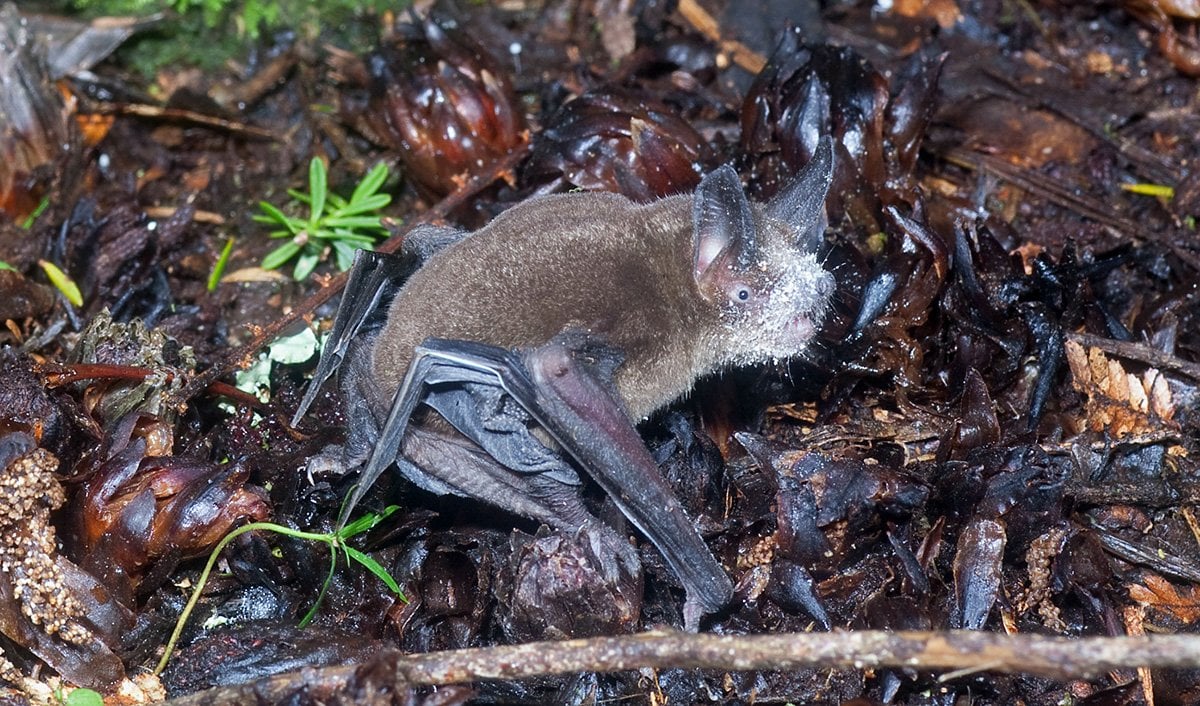 The lesser short-tailed bat. Image credit: Nga Manu Images NZ/Flickr
Reading Time: 3 Minutes • Print this page
Bats are the only mammals on Earth that can use their own power to fly. Sure, flying squirrels, lemurs, and possums exist, but like this airborne frog, they’re faking it.

SO BATS are an incredible rarity in the animal kingdom, which makes it all the more strange when one decides to spend just as much time hunting on the forest floor as it does in the sky above.

Meet the lesser short-tailed bat (Mystacina tuberculata) – the rare New Zealand species that appears to be taking its biggest evolutionary advantage for granted to become one of the most terrestrial bats in the world.

The lesser short-tailed bat is one of a number of species unique to New Zealand that don’t seem to take flying all that seriously. There’s the iconic kiwi, the adorable kakapo, and the South Island Takahe, which basically looks like a weird blue chicken.

But while New Zealand is known for its array of flightless birds, the lesser short-tailed bat is one of just two – possibly three – indigenous mammals left in the country.

There’s the New Zealand long-tailed bat (Chalinolobus tuberculatus), whose echolocation hits such a low frequency, some humans can actually hear it, and the greater short-tailed bat (Mystacina robusta), which hasn’t been sighted since 1965, and is now feared extinct.

It’s a very different picture from what the fossil record paints for ancient New Zealand, where several species of bats once lived, plus this peculiar, rat-like ‘Saint Bathans mammal’.

The more recent lack of native mammals in New Zealand is probably why the lesser short-tailed bat ended up the way it did – before humans introduced species like rats and dogs, the ground was just as safe for these little guys as the sky.

Lesser short-tailed bats are extremely fuzzy, and weigh around 12-15 grams. They’re easily distinguished from their long-tailed relatives by their large, pointed ears.

They roost in tree hollows, either by themselves or in colonies of over 100, and are thought to be ‘lek breeders’ – a term referring to the Swedish word for “play”, which describes large groups of males coming together to perform competitive dances and displays to court the females. The lesser short-tailed bat version of this lek behaviour is group ‘singing’ – a recent study found evidence that the males compete for traditional singing posts, where they titter for long periods of time to attract a female.

They’re just one of two species of bat in the world thought to engage in lek mating behaviour.

When they’re not singing their hearts out from their hard-won posts, lesser short-tailed bats are hunting for insects or foraging for fruit, nectar, and pollen.

But even in the air, they don’t tend to go any higher than about 1.8 metres.

To get around on the forest floor, they fold their wings beneath a leathery protective membrane, turning their forearms into makeshift front legs. Their ‘thumbs’ end in large, talon-like claws, as do their back feet, which enable them to crawl about on the ground and up into trees with relative ease:

The sad news is these little bats are now classified as vulnerable, occupying just 30 percent of their original range.

And what makes conservation efforts so important for the species is how incredibly long it’s been holding on – bizarre fossils of a giant walking bat found near Central Otago on the South Island in 2015 suggest that these creatures have been crawling the forests of New Zealand for some 16 million years.

Maybe they’ve got the right idea after all.