The fish that lives in a sea cucumber anus

Bec Crew is a Sydney-based science communicator with a love for weird and wonderful animals. From strange behaviours and special adaptations to newly discovered species and the researchers who find them, her topics celebrate how alien yet relatable so many of the creatures that live amongst us can be.
By Bec Crew • August 8, 2014 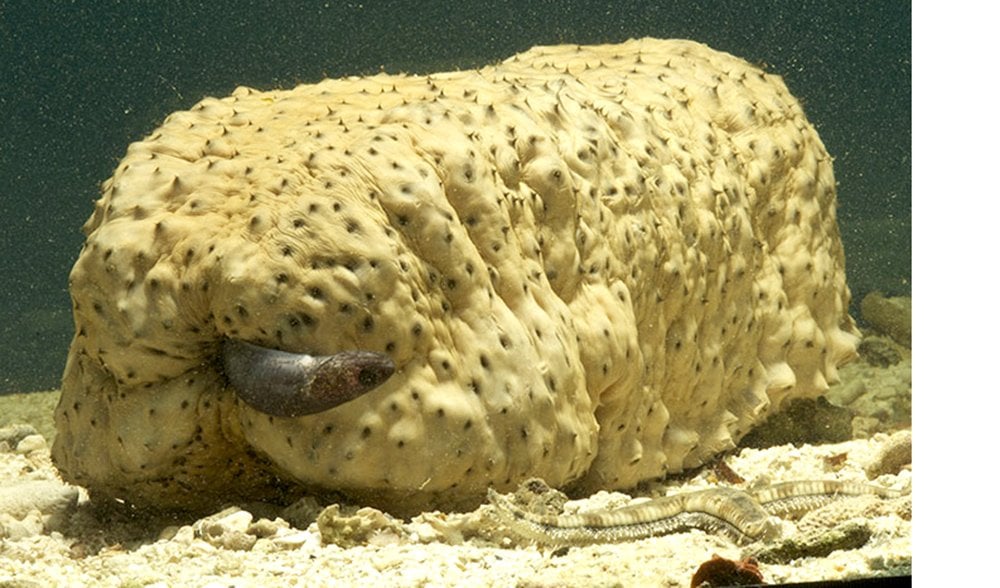 THIS SLENDER, TRANSLUCENT and scaleless fish really takes advantage of being pencil thin. Not content to make its home in the seabed or the crevices of rocks, it lives in the body cavities of invertebrates such as clams, oysters and starfish. And a notorious few reside exclusively in the anuses of sea cucumbers.

‘Pearlfish’ is the common name of the Carapidae family, which includes 31 species of fish found in tropical waters all around the world, including off the coast of every Australian state except South Australia.

Almost all species of the pearlfish family make their homes within other animals. The family earned its common name after a dead pearlfish was discovered inside an oyster shell, having been caught up in its host’s new mother-of-pearl lining as it set.

Not all pearlfish find the experience of living inside another sea creature so perilous. It’s actually a lot safer for them than any other living arrangement, because it allows them to hide their delicate bodies away from predators during the day, before emerging under the cover of darkness to feed at night.

Pearlfish from the Carapus and Encheliophis genera have chosen the anus of the sea cucumber as their preferred abode.

Once they stumble across a sea cucumber, they will locate its anus – or cloaca – by following the current of water as it’s inhaled and expelled through it via a structure called the respiratory tree. With the anus located, the pearlfish will tap the area a little before penetrating the sea cucumber using one of two methods:

Once inside, the pearlfish settles into the respiratory tree.

Pearlfish usually like to live alone inside a sea cucumber, but sometimes a pair will take up residence in the same host. One very special case, discovered in 1977 by New Zealand biologist Victor Benno Meyer-Rochow from Jacobs University in Germany, saw no less than 15 pearlfish living inside a single sea cucumber’s anus. Ouch.