Home Blogs AustroPalaeo Why Jurassic Park had it all wrong

Why Jurassic Park had it all wrong

John Pickrell is the editor of Australian Geographic. He is a science writer, author, nature lover and self-confessed geek. Blog posts range over Southern Hemisphere palaeontology, dinosaurs, megafauna, archaeology, palaeoanthropology and a smattering of other topics.
By John Pickrell • July 5, 2014 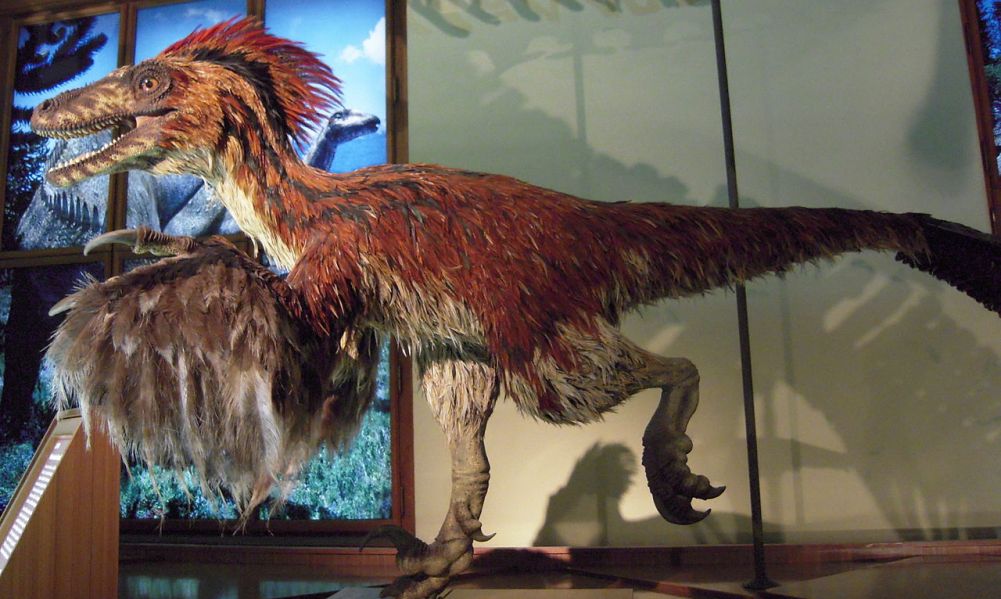 This feathered model of Deinonychus created by Stephen Czerkas for the Vienna Museum reveals what Velociraptor would have looked like. Don't expect anything like this to appear in the next installment of Jurassic Park though. Image credit: Wikimedia/Domser
Reading Time: 3 Minutes • Print this page
What would a feathered Velociraptor look like – and will one feature in the fourth Jurassic Park film, to hit cinemas in 2015?

THE FOURTH INSTALLATION of the Jurassic Park movie series, Jurassic World, is being filmed in Hawaii and New Orleans right now, and is due to hit cinemas in June 2015. But the film has courted controversy for a number of reasons, not least for the suggestion that its representations of dinosaurs are inaccurate and not based on current science.

It may come as a surprise to hear that we have discovered that majority of what we know about dinosaurs since the first film hit cinemas in 1993. What we knew before then now pales into insignificance compared to what we’ve learned since the first feathered dinosaur Sinosauropteryx prima was discovered in China in 1996.

More than 40 species of feathered dinosaur have now been discovered in China, and they’ve shown us that carnivorous dinosaurs from all over the world were very probably feathered, even if their fossils retain no traces of them.

Currently around one species of dinosaur is discovered every week – most in China, Mongolia, South America and Africa, revealing that we really are in the golden age of dinosaur science.

Though Jurassic Park author Michael Crichton could have had no idea when he penned the book in 1990, we now know that Velociraptor, and its North American counterparts Deinonychus and Dromaeosaurus, may have had long feathers on their forearms – in effect small wings. These may have helped them work as a pack to bring down larger herbivores; these proto-wings would have provided a bit of lift as the animals ran and leapt into the air, vicious sickle claws outstretched.

The photo above is a life-size reconstruction of Deinonychus created by Stephen Czerkas for the Vienna Museum of Natural History, in Austria, and reveals the animal to have been fully feathered, very much as experts now believe this species and Velociraptor would have looked in life.

Watch a clip of Australian Geographic editor John Pickrell talking to ABC News 24 about feathered dinosaurs and the links between dinosaurs and birds:

We know that Velociraptor had large feathers on its forearms because in 2007 a team of scientists, including Dr Mark Norell at the American Museum of Natural History in New York, showed that a specimen excavated in Mongolia in 1998 had clear ‘quill knobs’ pitted into its forearms. On the arm bones of modern birds, such as pigeons, these knobs are the attachment point for large flight feathers.

“The more we learn about these animals, the more we find that there is basically no difference between birds and their closely related dinosaur ancestors like Velociraptor,” Mark told reporters when the discovery was announced. “Both have wishbones, brooded their nests, possess hollow bones, and were covered in feathers. If animals like Velociraptor were alive today our first impression would be that they were just very unusual looking birds.”

Aside from the fact that Stephen Spielberg’s Jurassic Park ‘raptors’ lacked feathers, they were also completely the wrong size for the species, which in reality was about the size of a turkey. The animals depicted in the 1993 film were more like Deinonychus in size.

The pack-hunting behaviour displayed in Jurassic Park was most likely based on the 1966 fossil discovery of a number of 2m-long Deinonychus specimens found in the Badlands of Montana locked in combat with an 8m-long herbivore called Tenontosaurus.

But will pack-hunting Velociraptors make a comeback in 2015’s Jurassic World and will they this time be feathered as we really know they were?

The film’s director Colin Trevorrow put any doubts about this to rest when he tweeted simply “No feathers. #JP4” to his Twitter followers. It’s not clear whether this decision was made for continuity with the earlier films (although the raptors in the third film did feature feathery tufts on their heads), or if it’s because feathered raptors would look more like large chickens than terror-inducing carnivores.

Many other details of the film have leaked on blogs, revealing that the star predator is to be a monster-style hybrid dubbed ‘Diabolus rex’ – this fictional creature is said to contain a mix of genes from T. rex, Velociraptor, snake and cuttlefish.

Some say these films are merely a bit of fun and shouldn’t be taken too seriously, but I believe that 1993’s Jurassic Park has had an enormous impact on the wider public perception of dinosaurs. The new film is likely to be one of 2015’s big blockbusters and it seems like a sad missed opportunity if the dinosaurs it portrays are based on dated science.

I’d instead love to see some fabulously feathered beasts that get the message out that dinosaurs were much more bird-like than most people have ever imagined. Dinosaurs didn’t become extinct when an asteroid or comet here the earth 66 million years ago; you only need to go out and look up into the trees and skies to find them.

John Pickrell is the author of Flying Dinosaurs: How fearsome reptiles became birds, published by NewSouth in June 2014. Follow him on Twitter @john_pickrell.